Tesla has unveiled a new electric HGV, the first commercial vehicle to come from the electric car manufacturer.

The Tesla Semi truck claims a range of 500 miles on a single charge and is capable of pulling 36,287kg – the maximum weight allowed on US roads. Tesla CEO, Elon Musk, promises the Semi would be capable of 0-60mph in 20 seconds even when fully loaded, and can climb at five percent gradient at 60mph. The Semi uses some elements from the recently-introduced Tesla 3 car, including the four electric motors. 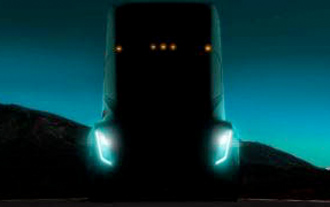 The Tesla Semi is billed as costing 20% less to run than a conventional diesel-powered truck, as well as benefitting from Tesla’s Autopilot autonomous driving capability, something which Musk claims to make the Semi impossible to jackknife. A network of “Megachargers” will allow the Semi to be given a charge adding 400 miles of range in only 30 minutes, and the electric drivetrain is guaranteed for 1 million miles.

Without a conventional engine and drivetrain, the driver is placed centrally within the cab with a secondary seat set behind, while a pair of control screens also taken from the Model 3 are set either side of the driver. Locating the batteries low within the chassis ensures a low centre of gravity too, which Tesla say reduces the risk of rollover, and allows a more efficient aerodynamic design. An on-sale date is yet to be announced but Musk confirmed that production of the Tesla Semi will begin in 2019.