The Tesla Model 3, the new Skoda Scala, the Mercedes-Benz B-Class and the latest GLE from the same stable all achieved the maximum rating. The new Kia Ceed and crossover SUV DS 3 Crossback rated four stars with equipment offered as standard but both make it into five stars territory when equipped with an optional safety pack. 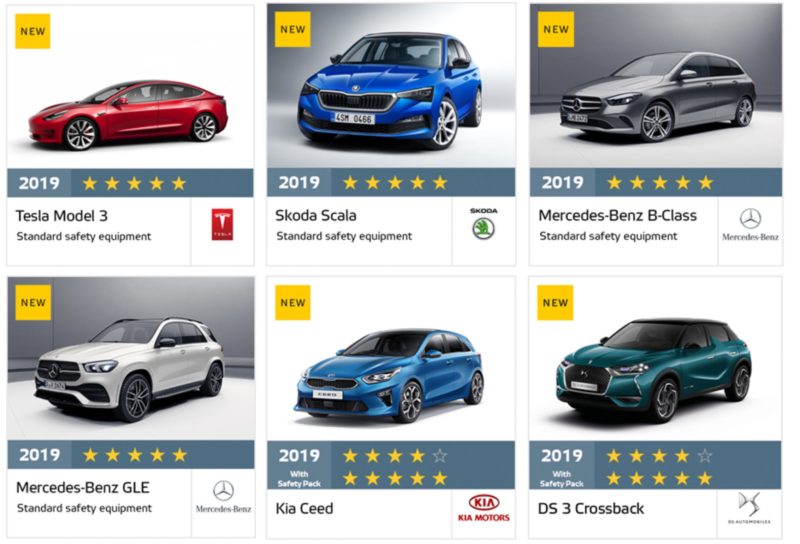 The Tesla Model 3 made a strong debut with a perfect score in the frontal offset deformable barrier crash test, a mainstay of Euro NCAP’s assessment since its inception in 1997. Its performance in the Safety Assist tests particularly impressed, thanks to its superb driver assistance systems like lane support, speed assist and autonomous emergency braking. The Tesla’s 94 per cent score in 2019 Safety Assist tests is the best yet under Euro NCAP’s most recent protocol.

Another novice, Skoda’s new Scala, positioned between consumer favourites Fabia and Octavia, just pips the Model 3 in overall crash performance, with a 97 per cent score in Adult Occupant Protection.  This firmly puts the Scala amongst the top small-family cars tested by Euro NCAP for this part of the assessment, along with the recently tested Mercedes-Benz A-Class and Mazda3.

With B-Class and GLE ratings, Mercedes-Benz is continuing its winning streak with its 10th and 11th solid five star result since 2014, underscoring that its safety reputation still is non-negotiable. Potential buyers of the Kia Ceed and DS 3 Crossback should inquire about the optional safety equipment on offer as Euro NCAP tests have shown that their respective “Advanced Driver Assistance” and “Active Safety Brake” packs will deliver better real-world safety performance.

commenting on the latest ratings, Michiel van Ratingen said: “It’s great to see cars doing so well.  Our tests get tougher and tougher, and cars continue to perform well, which means that car-buyers are getting an ever-safer range of vehicles to choose from. Next year, we up the ante again, with better tests of driver-assistance systems, a completely new frontal crash test and more attention to protection in side crashes. These new tests should help to make the roads safer for everyone.”