Suzuki GB is the Carmaker of the Year Award for 2017. It was announced at the recent Motor Trader Awards. The awards were held in London with over 1,000 guests in attendance and the judging panel voted for Suzuki for its clear focus on selling a range of small cars and SUVs, a memorable marketing campaign that featured Ant and Dec in their showrooms and a consistently excellent performance in the NFDA Dealer Attitude Survey. 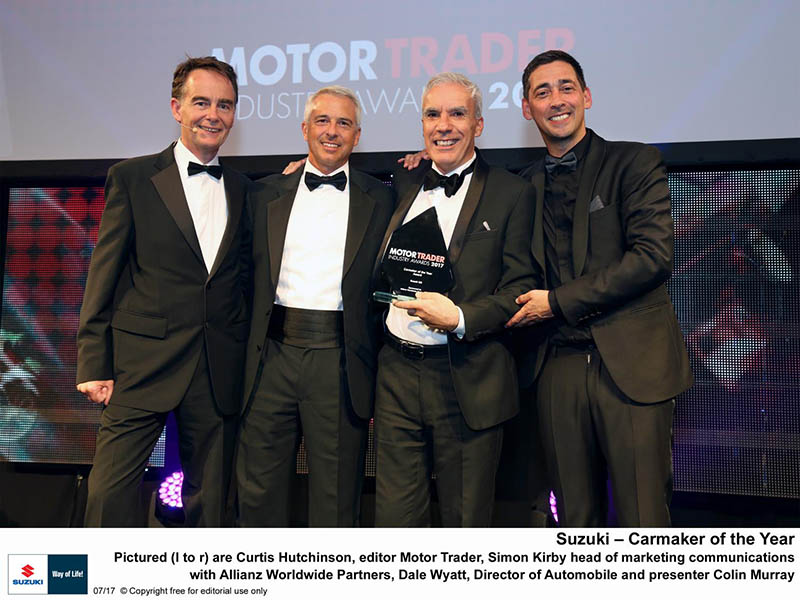 The judges also commented that on the product front Suzuki has developed a strong strategy for sales, with a focused car range. The new Swift launched in June 2017 completes a six-model lineup which includes Celerio, Ignis, Swift, Baleno, Vitara and S-Cross and with all proving a success in the showroom.

Last year was a very successful one for Suzuki, which saw registrations rise 10.8% to 38,167 cars and market share also increased to 1.4% compared to 1.3% a year earlier. The volume growth has been accompanied by a change of emphasis and a gradual move upmarket to provide value-for-money cars. Overall, the average transaction price of cars sold in 2016 rose by 11 per cent.

The network of 160 dealers comprises mostly owner-drivers with whom Dale Wyatt, Suzuki GB’s Director of Automobile, maintains a direct relationship. Each year Suzuki names its dealers of the year based on RoS, target sales, finance penetration, parts and accessory sales and CSI scores.

Suzuki regularly holds a highly successful regional “think tank” in a different part of the country to hear dealer views and take them on board. The Suzuki brand is also rated highly in the NFDA survey when it comes to current profitability.

The judging panel concluded that “Suzuki is particularly strong in the relationship they build with their retailers. They punch above their weight in marketing the brand and have delivered strong sales with a focused model range.”