The all new Volkswagen Arteon has gone on sale in Ireland priced from €43,295 for the entry-level 2.0-litre 150 hp, six-speed manual version. Volkswagen says the five-seater fastback combines the spaciousness of a saloon with the driving dynamics and design of a sports car.
The Arteon is positioned above the hugely-successful Passat, and while regarded as the spiritual successor to the CC, Volkswagen insists that the Arteon is an entirely new model and not seen as a direct successor. 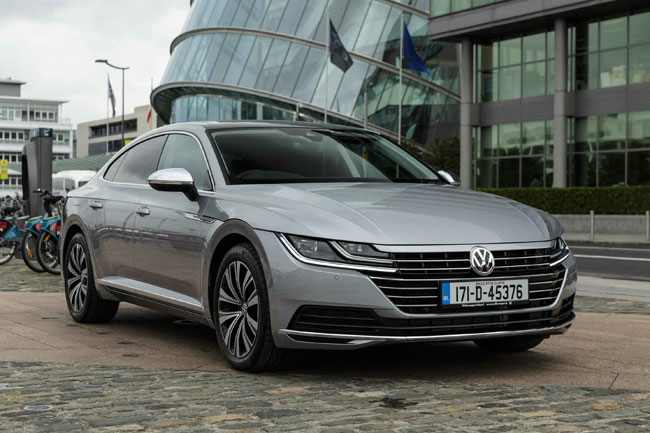 Virtually unchanged from the Arteon concept car of the Geneva Motor Show two years ago, the new Arteon sets the tone for a new era of Volkswagen design, best summed up by Volkswagen’s Head of Design, Klaus Bischoff: “The Arteon combines the design elements of a traditional sports car with the elegance and space of a fastback. It is an avant-garde, business class gran turismo that speaks to the heart and the head alike.”
Certainly one of the most significant design elements of the Arteon is its new front end. The stand-out feature is a bonnet that extends a long way forward and over both wings and a radiator grille that encompasses the vehicle’s full width. The LED headlights, daytime running lights and turn signals combine with the chrome-plated radiator grille cross bars as well as the bonnet.
Volkswagen boasts that the result of this is a front-end design that would be a match even for high-calibre sports cars. Rounding off the design of the striking Arteon is a powerful shoulder section, muscular wings and flared wheel arches which can house up to 20-inch alloy wheels.
A Cd figure of 0.265 for Arteon makes it extremely aerodynamic, which VW says assists both cabin refinement and fuel economy. It also claims that due to its excellent downforce figures at the rear axle, the new Arteon has no need for a rear spoiler that is deployable at high speeds.
The Arteon sits on the modular transverse matrix (MQB) platform and boasts extremely high body rigidity thanks to a combination of so-called ultra high-strength and hot-stamped steels. Body rigidity has been increased by 10 per cent in comparison to an equivalent hatchback model.
Featuring a long wheelbase. it provides the cabin with great spaciousness, the Arteon also boasts a large 563-litres of luggage space, which can expand out to 1,557-litres with the rear seats folded flat.
Inside, Volkswagen says that the design of the Arteon centres around the design element of the innovative air vent – designed as a functional yet decorative element – that extends across the entire width of the interior like a band. The impression is completed by fine chrome trim strips on the vent louvres, which creates a visual link to the cross bars of the Arteon radiator grille.
The Arteon comes to Ireland with a choice of three power outputs of the 2.0-litre TDI engine. The 2.0-litre TDI comes with either 150 hp, 190 hp or at the top of the range, 240 hp. The latter comes with 4MOTION all-wheel drive as standard. The 2.0-litre TDI 150 hp version is available with a choice of 6-speed manual or 7-speed DSG, while the 190 hp and 240 hp versions are only available with the 7-speed DSG.
There are three trim levels for Arteon in Ireland: Arteon, Arteon Elegance and Arteon R-Line. These trims are offered in a Y structure with Arteon as the entry level and Arteon Elegance and R-Line offering the best in comfort and sporting dynamics respectively. All Arteon’s are very well equipped, with entry-level specification including such items as 18” alloy wheels, ErgoComfort seats, 8” ‘Discover Media’ Sat Nav system, predictive cruise control, park distance control, app connect, rain sensing wipers, Security & Service subscription and 3-zone Climatronic A/C with controls in the rear.
Pricing for the Arteon starts at €43,295 for the Arteon 2.0-litre 150 hp with a six-speed manual transmission and there is a €2,200 price walk to the DSG version. The 2.0-litre 150 hp Elegance model with a manual transmission starts at €45,995. The 2.0-litre 190hp Elegance model comes with the 7-speed DSG transmission only and costs €50,195.
Volkswagen Ireland says that the Arteon is available with some attractive finance offers, and it adds that for a limited time only there are ‘Technology Upgrades’ available on the Arteon range.