Škoda Ireland has invested €120,000 in a new Dublin Airport advertising campaign, to promote its increasingly popular ‘Made for Ireland’ brand proposition, which includes a six panel takeover at the sky bridge in Terminal 1.

For the past 18 months, Škoda has used its ‘Made for Ireland’ campaign to show consumers that despite not being built in Ireland, every element of its vehicles’ composition is perfectly suited to modern day Irish lifestyles.

Following two successful home-produced television commercials, the brand has now decided to extend this campaign further and showcase how the current range of vehicles would have fitted in perfectly to events in Irish history and mythology.

The new campaign at Dublin Airport uses popular characters from ancient Irish history and mythology, such as St. Patrick, King Lir, Cú Chulainn, Fionn mac Cumhaill and Oisín and Niamh, to re-enact famous scenes and showcase the Škoda range, as the true legends within the given executions. 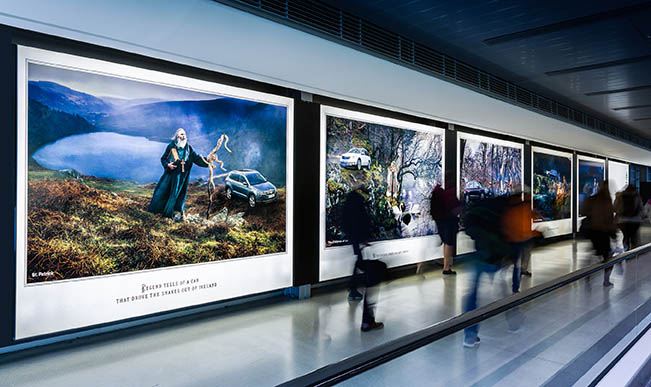 Working with creative agency Boys & Girls, the Škoda Ireland campaign is designed to highlight the creative message that everything about a Škoda is, and always has been, ‘Made for Ireland’.

Speaking about the project, Cathal Kealey, Marketing Communications Manager at Škoda Ireland, said: “We are really thrilled with this project which is already creating much discussion from airport passengers. Over the six-months that the campaign will be live, the Made for Ireland creative will be seen over six million times, which is a massive footfall for this high impact campaign. From start to finish, our agency team at Boys & Girls were fantastic. They have managed to capture powerful and emotive scenarios from ancient history and mythology, but also caveat them with the soft satirical presence of our vehicles as the true legends.”

As part of this campaign, Škoda Ireland has also cleverly acquired the walled areas at three of the baggage reclaim belts in Terminal 1, where they have erected a giant vinyl of a the carnivorous Škoda Superb Combi, to showcase its largest boot in its class.

For additional information on this campaign see www.skoda.ie