Six Skoda employees have been selected to represent Ireland at the international finals of the Skoda Challenge in Barcelona next year, having battled it out at the Irish National Final earlier this month.

Team Skoda Ireland will compete against 35 countries at their International Finals, which are in their eighth year. Ireland will be represented by Paul Bruton and Marc Gorman from Cork, along with Darragh Smith from Cavan, Robbie Matthews from Naas, Eoghan Watson from Dublin and David Mullane from Galway. 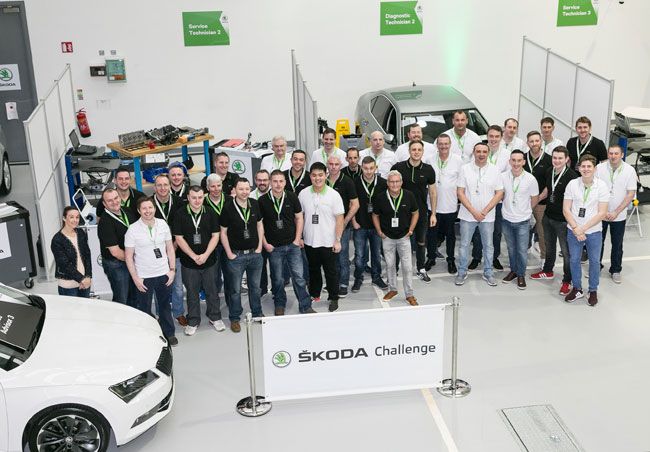 Pictured are competitors at the national final of the 2017 Skoda Challenge.

The Skoda Challenge has become a prestigious benchmark for measuring the qualities of the best employees in their global network and Ireland will be represented in six different categories: ‘Parts & Accessory Sales Perso’; ‘Service Advisor’; ‘Service Technician’; ‘Sales Consultant’, ‘Diagnostic Technician’ and new for 2017, ‘Sales Manager’.

Paul Bruton is a Diagnostic Technician with over 22 years’ experience, all of which have been spent with Noel Deasy Skoda in Cork. This is the second year that Paul has won, having won this category last year.

This is Marc Gorman’s first time entering the competition and won the Sales Consultant Category having only joined Noel Deasy Skoda earlier this year. Previous to this Marc worked in sales for a tyre supplier having started his career as a mechanic in the Naval Service.

David Mullane won the Service Advisor category for the second time having previously been successful in 2014. Dave has over 20 years’ experience in the motor industry, having worked in various dealerships both in Ireland and abroad before moving to Monaghan and Sons five and half years ago.

Darragh Smith won the Parts & Accessory Salesperson category for the second time in a row. Darragh started in Brady’s Skoda, Cavan four years ago, training as an apprentice technician before moving to the Parts Department in September 2016.

This is the first year that a Sales Manager category has been included in the national final and Robbie Matthews from Western Motors Skoda is the inaugural winner. Robbie joined Western Motors in November 2007 and became their brand manager in October 2012. Robbie has a track record of performance having previously being named as Skoda Salesperson of the Year in 2013.

Eoghan Watson started his career in Crash Repairs before commencing his motor technicians’ apprenticeship in, 2006. He joined Annesley Williams in 2013 as a Service Technician and has worked for the last four years.

Commenting on the results of their Challenge, John Donegan, Brand Director at Skoda Ireland, said: “We are delighted to announce the official line-up for Team Skoda Ireland that will be going forward to represent the country at the international Skoda Challenge finals in Barcelona next year. Paul, Robbie, Marc, Darragh, Eoghan and David are extremely accomplished professionals in their fields and we wish them the very best of luck in the finals. We have high hopes that Team Skoda Ireland can claim the number one spot in 2018.”