The Society of the Irish Motor Industry (SIMI) hosted its fifth annual Women@SIMI event in conjunction with its sponsor Bank of Ireland Finance recently in the Shelbourne Hotel Dublin. The event had its largest attendance to date with over 160 professional women from a variety of counties, representing different sectors within the Motor Industry in Ireland. 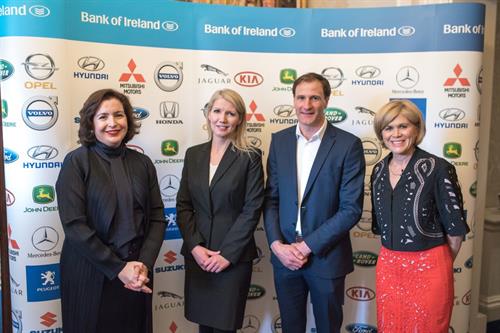 Delivering an impressive panel of speakers, Anne Cassin, Master of Ceremonies interviewed Francesca McDonagh CEO of Bank of Ireland. In a wide ranging Q&A, McDonagh spoke about her first year in the role of Bank of Ireland CEO and talked about the purpose of the Bank which is to enable its customers, its colleagues and its community to thrive. A core part of this is the focus that the Bank places on its customers, and how it really understands their needs and meets them.

Whilst the outlook for the economy is positive, Francesca McDonagh also discussed the issue of Brexit and the uncertainty that this generates, especially for those in business. Bank of Ireland is working closely with customers to give them as much guidance and support as possible at this time. On the topic of gender balance, she also spoke about the need for more senior female leaders in all sectors and industries, and discussed the Bank of Ireland gender target which was announced earlier this year. Under this target, Bank of Ireland, made a commitment for all appointments to senior management and leadership to follow a 50:50 gender ratio by 2021. 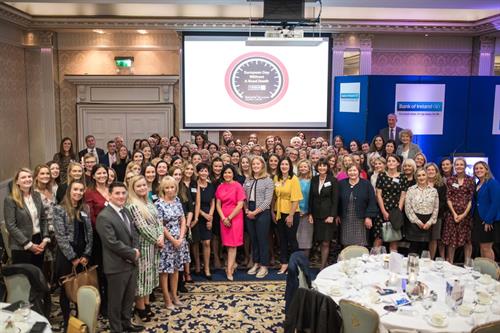 Geraldine Herbert, Motoring Journalist and Editor shared a passionate insight into her views on the Motor Industry. Having created her website wheelsforwomen.ie in 2012 due to a lack of engagement with women from the automotive world either editorially or on the marketing side. Herbert explained that “advertising needs to reflect women, images need to show women but the industry needs to employ more women. Role models and females must be visible in the industry.”

“There is a talent crisis across the automotive industry. Electric cars, Vehicle connectivity, self-driving cars, shifting consumer preferences, and increasing regulatory pressures are creating a complex environment and there are compelling reasons for women to be a part of that. Women represent a critical yet under represented resource capable of helping automotive companies to take that competitive advantage. Women have great intuition and can handle big changes extremely well. Right now big changes are what the car industry is facing what is so important is for young women to see female role models working within the Industry. We need to communicate that the automotive world is not just for men, creating flexible work practices and highlighting women role models would be beneficial but really what is needed is a culture change, a new way of thinking outside of traditional gender roles. That way a greater number of women can be recruited into all aspects of the Industry and this is turn will filter through to the advertising, images and marketing efforts.” Herbert added.
Gerard O’Farrell President of SIMI addressing attendees on this his first official engagement as SIMI President, opened proceeding: He acknowledged the importance of recruiting top talent and encouraging both female and male executives to become more actively involved in helping to change the perception of careers within the Industry as a very attractive career option.

Despite the challenges facing by the Motor Industry in terms of Brexit and WLTP Emissions, O’Farrell also highlighted the advances in technology, innovations in autonomous driving, enhanced connectivity, and the increasing complexity of cars. He believes there are emerging opportunities for Ireland to position itself as a centre of excellence for software engineering within the automotive Industry and to become a world leader in this field.