Shell has announced it will introduce a hydrogen filling station to its Beaconsfield site in the UK, making it the first location there to sell the fuel under the same roof as petrol and diesel.

Supplied by ITM Power, the Beaconsfield location generates the hydrogen onsite using an electrolyser, fed only by water and electricity. Opened as part of the H2ME project, it was partially funded by the European Fuel Cells and Hydrogen Joint Undertaking (FCH JU) and the UK’s Office of Low Emission Vehicles (OLEV). 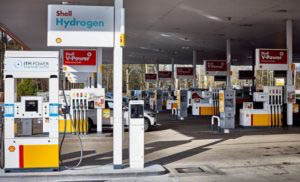 Mike Copson, Hydrogen Business Development Manager at Shell, said: “We’re delighted to be opening a new refuelling site at Shell Beaconsfield, demonstrating our ongoing commitment to hydrogen as a vital part of the UK’s future transport system. Bringing hydrogen under the canopy for the first time is a fantastic step towards making it a convenient and viable fuel choice for UK drivers.”

Roads Minister, Jesse Norman commented: “This is an exciting example of how innovative technologies are helping the Government’s Future of Mobility Grand Challenge – contributing towards meeting our climate targets, while supporting the UK’s low-carbon economy. Hydrogen has the potential to play a vital role in decarbonising transport, so the unveiling of the UK’s first integrated hydrogen refuelling station is an important step forward.”