With just two rounds left on the 2018 calendar, no fewer than seven drivers remain in contention to lift the laurels in the fiercely-disputed RX2 International Series presented by Cooper Tires – and Lohéac next weekend (August 31 – September 2) is likely to play a key role in the final destiny of the coveted crown.

Befitting of its status as the official FIA World Rallycross Championship feeder series, the RX2 champion will be rewarded with a single-round World RX Supercar prize drive, with the eventual second and third-placed finishers each earning themselves a World RX Supercar test. 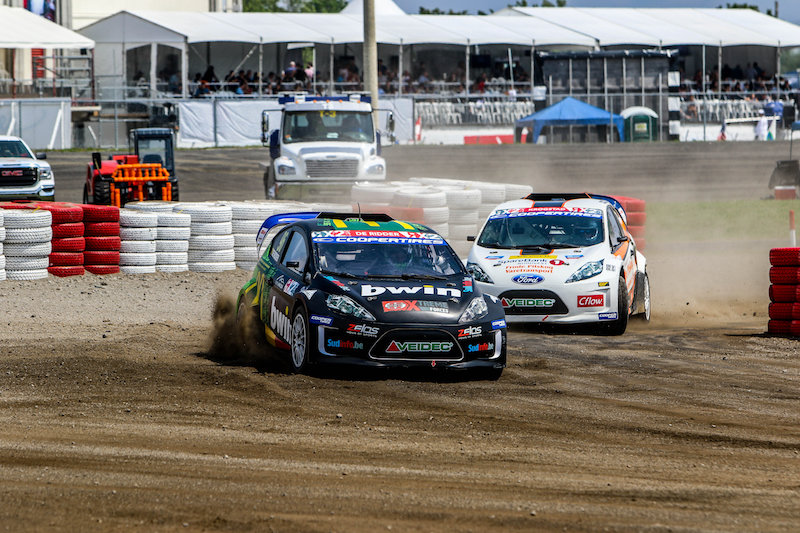 The momentum at the summit of the title standings has ebbed-and-flowed since the beginning of the campaign, with JC Raceteknik’s Ben-Philip Gundersen and Olsbergs MSE pairing Oliver Eriksson and Guillaume De Ridder alternately taking turns to top the table.

Courtesy of commanding victories in Britain and last time out in Canada, it is Eriksson that will arrive at Lohéac in pole position, holding an 11-point advantage over De Ridder, who came within a whisker of winning in France in 2017.

The duel between the two OMSE stablemates has been nip-and-tuck season-long, and both are aware that with opportunities to score fast running out, a strong performance next weekend is absolutely crucial.

“In Norway and Sweden, Guillaume grabbed the upper hand, so I knew I absolutely had to fight back at Trois-Rivières and happily, that’s what we did – but it’s only going to get even tougher from here on in,” acknowledged 19-year-old Eriksson, who has led the way in the classification since Silverstone at the end of May.

“It’s no secret that Lohéac isn’t ideally suited to my driving style – unlike me, most of my rivals competed in karting in the past, which is sure to help them as the tightly-packed gravel plays to the strengths of those with previous circuit racing experience – so the key will be to settle quickly into a good rhythm. It’s going to be a very exciting end to the season, and every single race will count.”

“With its Tarmac-like gravel sections, Lohéac should be a good track for me,” added Paris-based De Ridder, who works as a powertrain engineer for Renault’s Formula One team, meaning he can expect to enjoy enthusiastic support from the 70,000 spectators that regularly fill the circuit grandstands and banking. “I spent ten years in karting earlier in my career, and that really teaches you how to extract every last hundredth-of-a-second out of driving on asphalt.”

“Lohéac is like a second home event for me after Mettet, and I always receive a warm welcome from the passionate and knowledgeable fans. Having come so close to winning last year, there can be only one objective this time around – victory.”De Ridder added.

Henrik Krogstad is currently Eriksson and De Ridder’s nearest pursuer, having tallied three podium finishes from five starts in his maiden campaign in RX2 – and as one of the drivers with a successful karting career behind him, the young Norwegian is confident of another competitive showing.

Right on Krogstad’s heels are Sports Racing Technologies star Vasiliy Gryazin and Ben-Philip Gundersen in another JC Raceteknik car. The former sped to his breakthrough rostrum appearance at Lohéac last year and will surely fancy his chances of replicating that result 12 months on, with the podium having frustratingly eluded him thus far in 2018.

Gundersen and JC Raceteknik team-mates Sondre Evjen and William Nilsson are the remaining three drivers still in the reckoning – but like Krogstad and Gryazin, they will need to outscore Eriksson in France if they are to maintain their bids. Gundersen has only once made the final since his curtain-raising Mettet success but is always a threat, while Evjen is eager to arrest a run of ill-fortune that began with a spectacular barrel-roll in Sweden in Jluy and continued with a start-line collision in Canada.

Nilsson has got quicker and quicker as the season has progressed and produced one of his finest performances of 2017 at Lohéac, but the list of potential winners in France is far from confined merely to the title protagonists. Fast Finns Jami Kalliomäki and Sami-Matti Trogen have each reached the final this year – the latter in the most recent outing at Trois-Rivières – and both rookies look to be on the verge of landing a major result.

Their more experienced SET Promotion stablemate Simon Syversen shone at Lohéac last year with a fourth-place finish, while Conner Martell (Team Färén) set the best lap of anybody in the final in Canada and was challenging Eriksson for the lead when he came to grief against the unforgiving tyre barriers. The American will be fired-up to make amends in France, as team-mate Nathan Heathcote targets the top six for the first time.

Piloting the third OMSE car, Cole Keatts is riding the crest of a wave off the back of an inspired run to his maiden podium finish at Trois-Rivières, and the Idaho-born teenager will be bidding to build upon that burgeoning form next weekend. The 18-strong entry is completed by Simon Olofsson – returning to the fray after missing the Canadian round – fellow Swede Andres Michalak, record-breaking former Olympian Albert Llovera, Stein Frederic Akre and series newcomer Edijs Ošs, who will partner compatriot Gryazin at SRT.

The Lohéac RX2 action will begin with free practice on Friday (August 31), followed by the first three qualifying races on Saturday (September 1) and the remaining qualifier, two semi-finals and final on Sunday (September 2). Fans will be able to follow all of the qualifying races and both semi-finals live via the RX2 Series Facebook page, with the final featuring as part of the live World RX television broadcast.

Paul Coates, General Manager, Motorsport, Cooper Tire Europe said: “This track has one of the shortest start straights into the first corner, which – combined with one of the longest joker laps – means there is invariably a lot of action. Lohéac can be a particularly abrasive circuit, so tyre strategy is an important factor here. For the RX2 drivers and their teams, managing tyre usage and strategy is a key skill gained in terms of motorsport experience.”

For more information on Cooper Tires contact Daly Tyres on 069 648 99 or http://www.dalytyres.com