Once upon a time, long journeys by car were an opportunity for families to bond. Kids would squabble and play i-spy while their parents kept the peace, everyone watching the world go by together.

Removing the rose-tinted spectacles, today’s car journeys are a lot different. Traditionally going on summer drives was all about the journey, but parents today admit that their kids have their heads down most of the time, immersed in their devices. 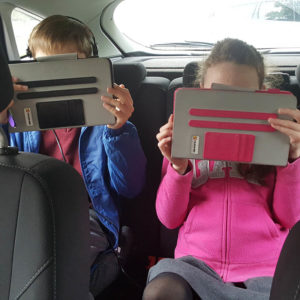 Research by Enterprise Rent-A-Car has found that almost one in three (30%) of Irish parents with children under 18 admit that their kids often play on a tablet or phone “for hours on end” in the car (and in everyday life). With Irish motorists covering an average of 612km while driving on holiday this summer, that’s a lot of screen time.

The research also suggests, however, that in spite of frustration and anxiety about over-reliance on devices, parents are waving the white flag and admitting defeat in their attempts to limit the time their kids spend on mobile devices.

Even though 26% of parents worry that it could be bad for children’s health to play on tablets or phones for long periods in the car, and 25% would prefer to engage more and have conversations, just 15%of parents have become angry with their kids for staying glued to a device as opposed to interacting with others.
“For families heading off on a long drive in the car during the summer, it is not the same as 20 or even 10 years ago,” says George O’Connor, Managing Director of Enterprise Rent-A-Car Ireland. “With the emergence of mobile technology, you’re simply not comparing like with like and most parents accept that devices are part of the journey now.

“However, the research suggests that a lot of parents are maybe losing the battle to get their kids off the devices and interacting with others,” O’Connor said. “Thirty per cent of our survey respondents admit their kids stay too long on their devices but only 15% say they’ve been angry as a result. It seems that for the sake of a quiet life, we are letting our kids win that battle.”

However, all is not lost where ‘traditional’ car games are concerned as 24% of parents say their kids still play the old reliable i-spy in the traditional way. But the onward march of technology seems unstoppable.
As a result, 28% of parents with kids under 18 totally control their kids’ tablets and are in charge of downloading what their children use, and a further 26% check the games their children download to make sure that they are suitable. Just 17% say that their children can use the tablet however they like.

And finally, for those whose kids ask the dreaded question “Are we there yet?” during a car journey, the Enterprise research found that it takes on average just 38 minutes for a child to pop the question. In response, just over half (51%) of parents have lied to their children about how long a journey is going to take.