Nowadays it is hard to imagine a vehicle without one and this week an important automotive component celebrates its 110th birthday – It’s the speedometer. 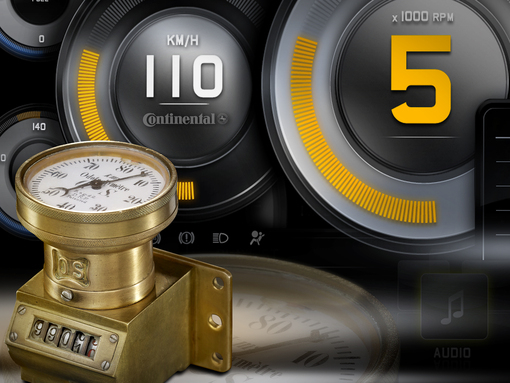 So where it came from, how does it works and where it is heading. Well, to mark 110 years of its existence, automotive supplier Continental has researched all  matters related to the ‘speedometer’.

Be it by land, water or air, when people travel, they also want to know how fast they are going. To do so in a car, the driver simply looks at the speedometer.

It is considered to have been born in 1902, because October 7 of that year was when engineer Otto Schulze registered the eddy-current speedometer at the Imperial Patent Office in Berlin. And the ground-breaking invention at the time quickly spread through the global automotive industry.

Today, as was the case then, speedometers in the actual sense of the term are rev counters, which show the number of revolutions of the wheel or the gear shaft as a distance per unit of time. “Nowadays, at a time when we travel at 100 km/h or faster on a daily basis, the idea behind the speedometer is even more relevant than when it was first invented, when most motorized vehicles had a top speed of just 30 km/h.

The speedometer is necessary, because although humans with their vestibular system can perceive positive or negative acceleration, they are not so perceptive at constant speeds,” explains Eelco Spoelder, head of the Instrumentation & Driver HMI business unit at Continental.

“Anyone who, after driving on the highway for a while, has turned off into a 30 km/h zone and noticed how difficult it is to gauge the speed properly will be familiar with this,” Spoelder adds.

People rely on aids to give them reliable information about speed. Rev counters or fuel-level displays, acoustic or optical parking assist, blind spot assist and radar systems help whenever the driver needs precise information, but can only make a rough estimate themselves.

From eddy currents and stepper motors: That is how the needle moves

From the first eddy-current speedometers to the instruments of today, technology has made great progress. “The most noteworthy is the development from the mechanical-electromagnetic function principle to mechatronic or purely electronic systems,” describes Spoelder.

In Otto Schulze’s eddy-current speedometer, a flexible shaft transmits the number of revolutions of the wheel or gear shaft to the speedometer and sets a magnet in rotation there. This rotation generates eddy currents in a metal disk, which is located over the magnet and is penetrated by its magnetic field. The reaction between the magnetic field and the eddy currents creates a torque which moves the disk in one direction. 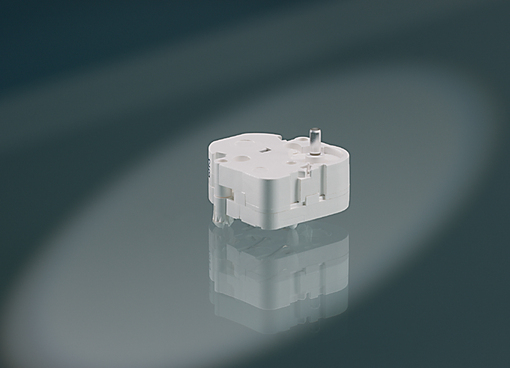 In order for the instrument’s indicator to show the correct speed value, a calibrated spring holds the disk against the torque of the magnetic field.

Today, however, rev counters and speedometers are based on electronics, from the sensors to the indicators. “In most vehicles, the driving force behind the speedometer and rev counter needle is a stepper motor,” says Spoelder.

The type of indication does not differ much from the first speedometers 110 years ago, in terms of the main aspects. Even though the first fully digital LCD display appeared in 1986 in the Volkswagen Golf II GTI, drivers in the cockpits of most cars still look at a needle that moves on a round scale and indicates the speed or number of revs. 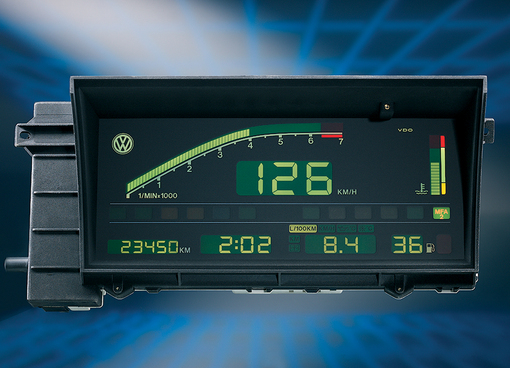 “The fact that speedometers and rev counters are usually round is largely for ergonomic reasons. Round instruments can be read intuitively. The driver doesn’t need to concentrate much, can focus their attention on the road and still obtains the most important information,” says Spoelder.

That is why instruments such as the speedometer, the rev counter, the tank display and the most important warning lights are all kept together within the driver’s direct field of vision (of around 30 degrees), usually in an instrument panel behind the steering wheel.

The instrument panel is supported by a head-up display, which shows driving-relevant information in the driver’s direct field of vision, as if floating above the hood. Displays such as the radio, internal temperature or navigation, which are not of primary relevance to the task of driving, are ultimately part of the infotainment area and are available to the driver in the center console display. 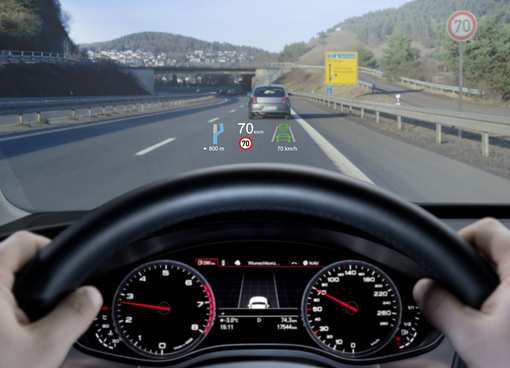 However, there is a trend towards more infotainment in the automotive industry, which is calling for new strategies. “A strict separation between driving-relevant information in the instrument panel and infotainment in the center console is almost no longer possible today, when in addition to radio, navigation and cell phones we also have the Internet coming into the car,” says Spoelder.

The more infotainment available to the driver in the center console, the greater the risk of visual distraction. To prevent this, Continental is investing in a concept that displays the most important information in the instrument panel, according to the situation, and thereby supports the driver. This is made possible by ever better display technologies and graphics processors.

Mid-range and luxury vehicles in particular, often have instrument panels designed for further information with a mixture of analog instruments such as the speedometer and rev counter, and screens. 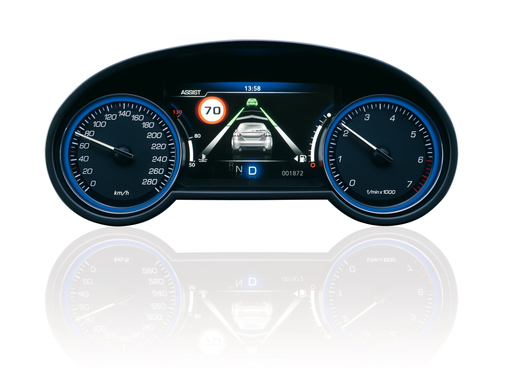 Special graphics processors today allow full-color animated graphics to be displayed in the instrument panel. With today’s graphics processors, even fluid and delay-free animations already succeed in fulfilling the special requirements in the vehicle. As such, full-color displays can even perform the tasks of traditional analog instruments. The entire instrument panel then consists of a single screen with a diagonal measurement of up to 31 centimeters (12.3 inches).

“With a freely programmable instrument panel, the display possibilities are virtually endless, like on a computer screen or television. An idea from ergonomics plays a fundamental role in this: The larger the freely definable area of the display, the better we can show content according to the situation,” explains Eelco Spoelder. 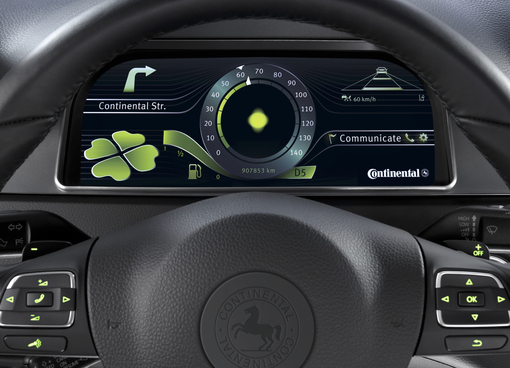 For example, the driver can determine whether assistance systems, such as a Top View 360-degree view, go to the center of the display, if for example they make a greater contribution to driving safety than speedometers or rev counters in the given driving situation. “The variability of future displays will allow ever more complex content to be easily and comprehensively displayed in the vehicle of the future,” says Spoelder.