Over 60 per cent of Irish people have had their chosen mode of transport damaged as a result of striking a pothole according to recent research.

In response to an AA survey of over 5,000 people, 62.66 per cent of respondents stated that damage had been caused to their car, motorbike or bike as a result of moving over an unrepaired pothole. In the case of motorists, tyre damage was the most likely fallout of a run-in with a poorly maintained road.

Of those who had their car damaged by a pothole, 58.67 per cent reported that one or more of their tyres had either been punctured, with 41.40 per cent stating that the wheel rim has also been damaged by the pothole. Meanwhile, almost 1 in 5 (18.11%) stated that their car’s suspension was damaged as a result of the incident. 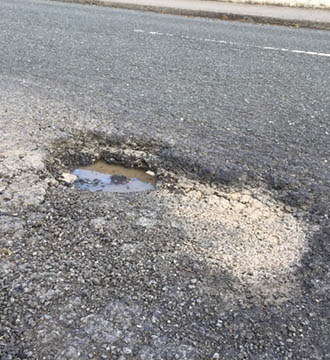 “Potholes have long been a significant annoyance for road users in Ireland and there is some evidence that the issue has been worse this years, in part due to the extreme weather conditions seen during the winter and spring. In the immediate aftermath of the snow and Storm Emma, we received a notable increase in breakdown callouts relating to potholes and while efforts to repair affected roads are ongoing, there is still a great deal of work to be done,” Conor Faughnan, AA Director of Consumer Affairs stated. “To be fair to the government they have made a sizeable amount of money available to assist with road repairs, but much of this work was delayed as a result of the snow we experienced almost up to Easter.

The advice to road users, particularly to motorists, is to slow down when driving on a road which shows signs of being poorly maintained so as to minimise the damage if you do strike a pothole.”  According to the survey the overwhelming
majority of those surveyed had to cover the costs of the damage themselves, with less than 1% receiving any form of compensation. Just 0.63% of respondents stated that the costs of repairs were covered by the local authority, while only 0.31% made a claim against their insurance to cover the costs.

Faughnan added: “Unfortunately, even though you are not at fault, making a claim against your car insurance to cover pothole damage can impact on your no-claims bonus, while many people either don’t know they can pursue the local council for compensation meaning they opt to cover the damage themselves as it’s simply cheaper or more convenient,”

“In previous years a lack of budget was identified as a significant factor in preventing necessary road repairs, but that excuse doesn’t hold up any more in light of previous government commitments. Ultimately, it’s becoming increasingly important that councils across Ireland make road repairs a priority, not just to prevent pothole damage but also to help make our roads safer.”