Renault has just launched their new ZOE. Their all-electric hatchback gets a fresh new look, more dynamic styling and some new body colours have been added. 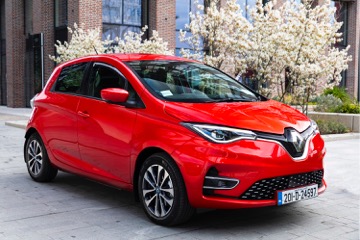 The French carmaker says that the new ZOE has an increased by up to 395 km range from new 52 kWh battery. Renault defines ‘long range’ as 380km WLTP or more (there is no industry definition). Renault says that their ZOE Z.E. 50 has a range of between 383 and 395km depending on the version.

They also promise faster charging with the option of 50 kWh DC (CCS), able to recover 145 km range in 30 minutes. It claims to be the only car with standard 22 kWh AC charging through ‘Chameleon’ charger, adding that that  makes the ZOE the most suitable electric car for Ireland’s public charging network.

A new regenerative braking ‘B Mode’ that allows single pedal driving has also been added. And full LED headlamps standard across the range.

Adding to its green credentials, there is 100 per cent recycled seat trim on Renault’s iconic model.

At €26,900 with a 395km range, Renault boasts that it saves customers €9,000 compared to other long-range electric cars. This claim is based on the next lowest priced car with a range exceeding this is the current Continental Irish Car of the Year, the Kia e-Soul SUV with an impressive 452km. It is price is €35,995 after the VRT relief and grant, which is €9,005 more than the ZOE Play version. The next-highest range is the Peugeot e-208 at up to 340km.

Renault points to the ZOE as being Europe’s best-selling electric car. At end February, 198,400 ZOE had been sold since launch – expected to exceed 200,000 in the coming weeks

The price includes an eight year/160,000-km battery warranty, while the rest of the vehicle is covered by Renault’s 5 year/200,000-km warranty. This compares to the aforementioned Kia, which offers a full manufacturer 7-year/150,000 km warranty in Europe.