The countdown is on to the Renault GAA World Games 2019, and the drive to the Deise has started with the launch of the programme of events in the host county of Waterford.

The initial stages of the Renault GAA World Games will be played out at the Sports Campus of Waterford Institute of Technology in Carriganore from July 28 to August 1, with the finals taking place on August 2 at Croke Park.

Renault Ireland is the title sponsor of the GAA World Games 2019 and the official car partner of the GAA for the next three years.

Local Renault dealer, H&H Motors on the Cork Road in Waterford, will support the festival at a grassroots level, and the dealership has handed over two Renault Kangoo vans to festival officials for use throughout the course of the GAA World Games. Dealership staff will be present at WIT during the Games and the stylish Renault and Dacia ranges will be visible around the area. 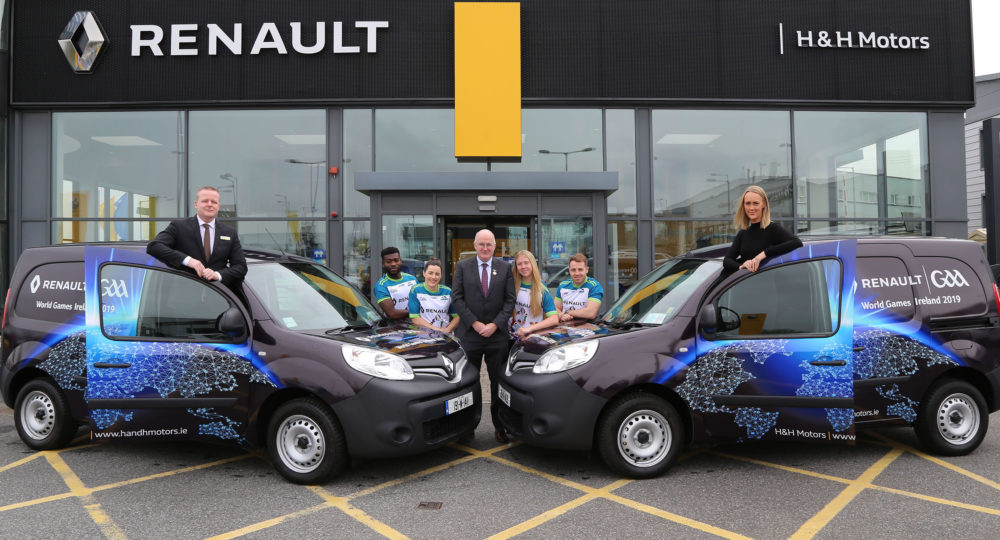 This is the third-ever staging of what is a major international festival and celebration of Gaelic Games participation all over the globe, and this summer features a record breaking 97 teams totaling 1,300 players coming to the South-East to take part.

More than 60 international teams will be twinned with local clubs from across Waterford GAA with the emphasis on a social and cultural exchange, and the competing teams and Waterford GAA clubs will take part in a major parade that marks the start of the World Games in Waterford City on Sunday, July 28.

Waterford City is being primed with flags and banners of welcome for the visit of a unique festival, expected to bring up to 5,000 additional people into the city and county for the week.

Keith Cullinane, Dealer Principal at H&H Motors: “We are delighted that such a unique festival is coming to Waterford and are thrilled to get involved and support at a grassroots level. This festival highlights the profound reach of the GAA around the world the passion for the games globally. We’re looking forward to saying céad míle fáilte to all of the teams involved for what’s set to be an unforgettable few days in the Deise!”