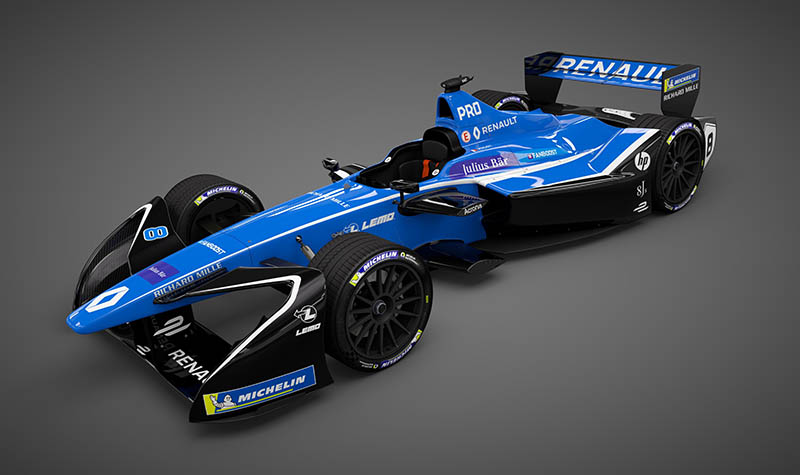 Renault e.dams is celebrating its third consecutive title in Formula E and has presented its new livery and partners for season 4.

The representatives of the Renault e.dams team, co-owners Alain Prost and Jean-Paul Driot, Jérôme Stoll and Cyril Abiteboul, respectively President and Managing Director of Renault Sport Racing, as well as Gilles Normand, Director of Renault Electric Vehicles and drivers Sébastien Buemi and Nicolas Prost came together to celebrate the team’s title won in Season 3, in the presence of the French and international media and the team’s partners at the Atelier Renault on the Champs Elysées.

With its third consecutive team title, Renault e.dams is the only squad to have won the title since the creation of the discipline. Last year, Renault e.dams scored the double, taking the Team’s title and Driver’s title with Sébastien Buemi, and will try in Season 4 to do it again and to remain undefeated in a more and more competitive championship.

During this celebration, the Renault Z.E.17 was unveiled by the drivers, Sébastien Buemi and Nicolas Prost, and presented by Alain Prost and Jean-Paul Driot. The new livery is this year, like last year, characterised by a very predominant lively blue presence, which is Renault’s symbolic electric vehicle color. The white adds a touch of elegance while also respecting the brand’s codes. A horizontal white line is a reminder of the Formula 1 livery and confirms the coherence of the Renault image in FA and FE.

Renault e.dams wishes to thank its partners (HP, Richard Mille and 8Js) that have been on board during its competition success and technical operations. For season 4, the team is proud to welcome a new partner Acronis. “Renault Sport Racing demands superior reliability, scalability, and performance for their data storage, essential in motorsport. Renault Sport Racing requires the best technology on the market, and this is the reason they chose Acronis Storage and Acronis Backup Cloud solutions, that are rapidly becoming the preferred option for automotive industry”, said Serguei Beloussov, CEO and a co-founder of Acronis.