The strong trend of recovery seen in the motor industry in 2014 (96,344 registrations) is continuing, with new car registrations in the first three months of the year showing a 29.68 per cent increase to reach 64,714, new research has shown. 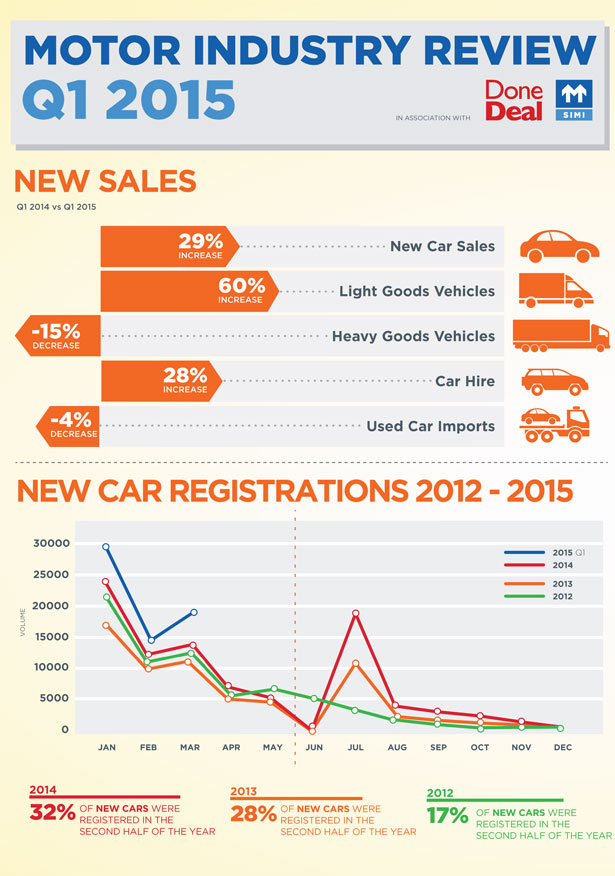 Economist Jim Power, author of the Review commented: “The growth in sales is reflective of ongoing improvement in consumer confidence, the labour market and the general economic climate. Credit conditions for motor finance are also good with the new finance products making a significant contribution. Commercial vehicle registrations are a key indicator of business confidence and investment activity.”   The SIMI and DoneDeal report also highlights that the cost of motoring has seen a decline in the first quarter of 2015. Petrol prices are down by 10.9 per cent; Diesel prices by 11.8 per cent and the average price of a new car has also declined by 2.5 per cent. Motor insurance costs however increased by 14 per cent. Average carbon emissions of vehicles registered in the first quarter of 2015 were 1.9 per cent lower than the same quarter in 2014 and 28.6 per cent lower than 2008 levels reflecting more environmentally friendly cars on Irish roads.

Commenting on the SIMI and DoneDeal report, Alan Nolan Director General, SIMI said: “Every county has experienced a strong growth in sales, ranging from Longford with the strongest growth of 47.2 per cent. Wexford is some way behind the trend with the lowest growth rate of just 12.8 per cent. Dublin accounts for 37.7 per cent of the national market, with Cork a distant second at 12.5 per cent. In terms of regional economic impact, the recovery in car sales is giving a boost to employment and general economic activity across the country. Employment in the sector is in steady recovery mode with an increase of 4,500 (12 per cent) jobs in 2014 bringing the total to 41,900 employed in the Industry. 51 per cent of SIMI Members surveyed have also said that they would be increasing their staffing level during 2015”.

The Exchequer has collected €574 million from new and used car sales in Quarter 1 of 2015, a 26.5 per cent increase on the same period in 2014. Jim Power stated: “Based on trends in the first quarter and in April, new car registrations in 2015 could reach 123,000 representing an increase of 27.7 per cent. this would generate an extra €223 million for the Exchequer and create an extra 3,400 jobs in the sector.”