The aforementioned 1.6-litre TDI 105 bhp engine will have CO2 emissions of just 99g/km, which is expected to be just within the top segment of four in Band A, which will in turn influence vehicle registration tax (VRT) and road tax rates. Volkswagen’s new price is based on the proposed new VRT rates revealed exclusively in the Auto Trade Journal and subsequently in the Irish Independent early last month.

Volkswagen says that the new car is lighter, safer, more advanced, more spacious, more efficient and better equipped than previous generations of Europe’s best-seller. And there have been over 29 million Golfs sold.

From launch, the Golf will be available in Ireland in three trim levels: Trendline, Comfortline and Highline (the GTD, GTI and BlueMotion models will join the line-up in 2013). Three petrol engines and two diesel engines will be available to order.

The petrol engine range starts with a four-cylinder 1.2-litre TSI unit producing 85 bhp, rising via a 1.2-litre TSI 105 bhp up to the all-new 1.4-litre TSI 140 bhp engine with Active Cylinder Technology. This helps to create an extremely efficient engine capable of 4.7 l/100km (combined cycle) and 109 g/km thanks to the ability to deactivate the central two cylinders under light loads. This makes it 23% more efficient than the equivalent engine in the previous version of the Golf. 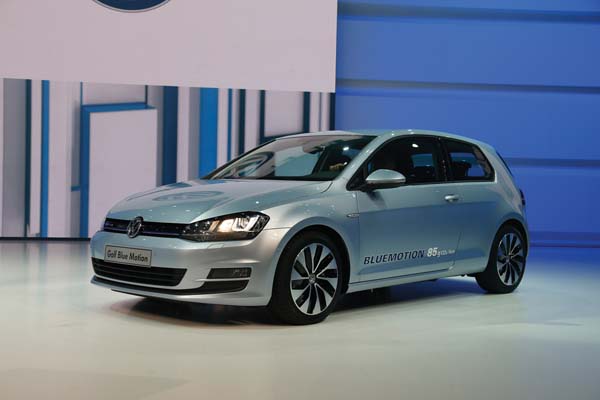 The two diesel engines at launch are a 1.6-litre TDI 105 bhp and a new 2.0-litre TDI 150 bhp unit. Both feature the latest common rail diesel technology for maximum efficiency. All new Golf models – both diesel and petrol – come with a Stop/Start system as standard, along with battery regeneration. A 90bhp diesel will follow in Quarter 2 of 2013.

Gearboxes are a mixture of five- and six-speed manuals, and six- and seven-speed DSG units, depending on the engines’ power and torque outputs.

Standard specification levels build on those of the outgoing Golf, bringing new items of luxury and technology to the class.

On Trendline models, the standard Composition Media system includes a 5-inch colour touchscreen, FM/AM radio as well as eight speakers (front and rear) and a CD drive (MP3 compatible). The CD drive is located in the glovebox along with the SD card slot.

Also standard is ‘Climatic’ semi-automatic air conditioning and an electronic parking brake, among a host of other features.

Moving up from Trendline to Comfortline trim brings an outstanding range of features, including Cruise Control, Bluetooth phone connectivity, Radio Composition Media which has a 5.8 inch touch screen display which responds to wiping and zooming gestures and there is access to ‘Phone’ and ‘Voice’ commands. There are USB and aux-in interfaces integrated into a separate compartment in the centre console in front of the gearshifter. On the outside, 15” Lyon alloy wheels come as standard on Comfortline models.

Volkswagen retailers will start taking orders for the new Golf from mid-to-late-October, with first deliveries due in mid-December. As ever, attractive finance rates will be available from Volkswagen Bank, with Hire Purchase rates of just 4.9% available on new Golf and PCP (Personal Contract Plan) rates from just €239 per month including delivery charges.

For full details, see the price list. For more information on the Volkswagen range visit www.volkswagen.ie.