The NGK-sponsored Quinnstheprinters.com BMW by Team IMR had plenty to cheer about at Brands Hatch over the weekend with Chrissy Rouse achieving his first podium of the 2018 Pirelli National Superstock 1000 season.

He finished second in Sunday’s race and with team-mate Jordan Gilbert again riding superbly over the course of the weekend, there was plenty to celebrate.

NGK Spark Plugs (UK) Ltd – a leading supplier of original equipment (OE) spark plugs, glow plugs and NTK Lambda and other engine management sensors – is a long-standing supporter of both two and four-wheel racing and is backing the new Quinnstheprinters.com BMW by Team IMR squad. 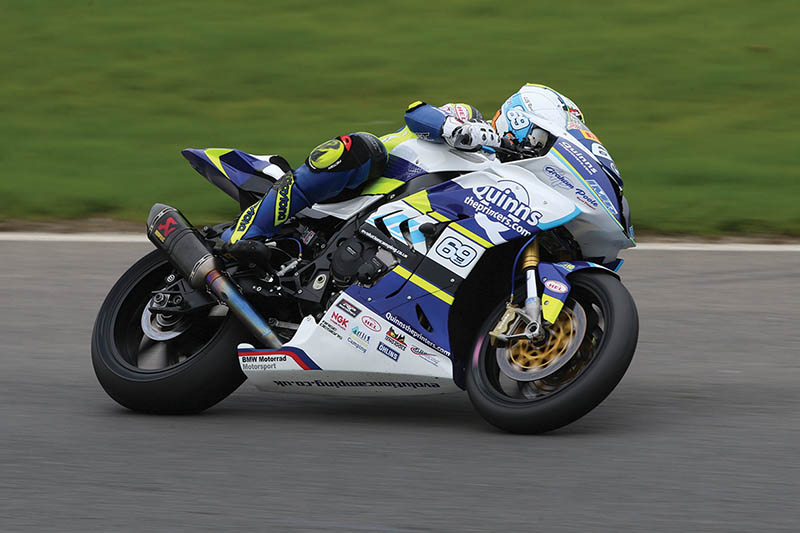 Mark Hallam, Marketing Manager, NGK Spark Plugs (UK) Ltd, said: “The team has made a fantastic start to the season and both Chrissy and Jordan have proven to be very competitive. I’m sure our customers who are motorcycling fans will enjoy following their progress over the rest of the season.”

In Saturday’s qualifying Newcastle’s Rouse’s time of 46.685 seconds saw him rewarded with sixth place for the afternoon’s 24-lap race. Gilbert was only four tenths of a second slower but was in 16th place.

At the end of the opening 1.2-mile lap Rouse slotted into seventh place with New Denham’s Gilbert in 18th. However, from that moment on the duo continually moved forward, overtaking a number of riders, and they were rewarded for their efforts with Rouse taking fourth place and his team-mate moving up to 14th. However, he was promoted up the order to 13th after the race following a rival’s exclusion for a technical infringement.

For Sunday’s race, Rouse started in fourth place and Gilbert in 14th but the former had a tough opening lap and slipped back to ninth, two places ahead of his team-mate who’d made a good getaway. From that moment on though, Rouse was one of the fastest riders on track and as early as lap five he’d moved up into a podium position.

On lap nine, he moved ahead of race one winner Andy Reid to claim second spot and although he set the fastest lap of the race, the gap to the race leader remained constant around the one second mark. Gilbert took ninth place after being part of an eight-rider battle for fourth.

Team Manager Ian Moffitt said: “At the beginning of the year, our aim was to get some solid results in the first couple of rounds and grow and develop as quickly as we could in order to establish the team in the championship.

“We knew Chrissy would be aiming for more so to finish on the podium in just our second meeting is superb. He was struggling a little bit over the weekend in sector three but in both races he came through the pack well and was one of the fastest riders on track so he’s right in the mix now and ready to challenge for the race wins.

“Jordan continues to impress us and for someone who had never ridden a 1000cc bike before this season the job he’s doing is phenomenal. His ninth place in race two was simply superb and with both riders running inside the top ten of the championship, we couldn’t be more delighted. It’s been a smooth, trouble free weekend and it’s been a great meeting for the whole team.”

Rouse is now in fifth place in the championship with Gilbert in ninth position. The next round of the series takes place at Oulton Park, Cheshire on May 5-7.