Ireland’s Car of the Year, the Peugeot 3008 SUV has scooped gold in both the “Car of the Year” and “Mid-Size SUV” categories, topping the poles as the “Best Car to Own”, in the latest Auto Express Driver Power survey, the UK’s largest and most in-depth automotive customer satisfaction survey.

With participation from more than 80,000 car owners, customers ranked the Peugeot 3008 SUV as the best performing Mid-Size SUV in five of the nine Driver Power judging categories: Exterior; Practicality & Boot Space; Ride & Handling; Safety Features and Reliability & Build Quality. The victory did not stop there as the 3008 SUV was rated as the best vehicle in the ‘Exterior’ category and the ‘Safety Feature’ category, across all of the vehicle classes, before it took the overall “Car of the Year” top spot. 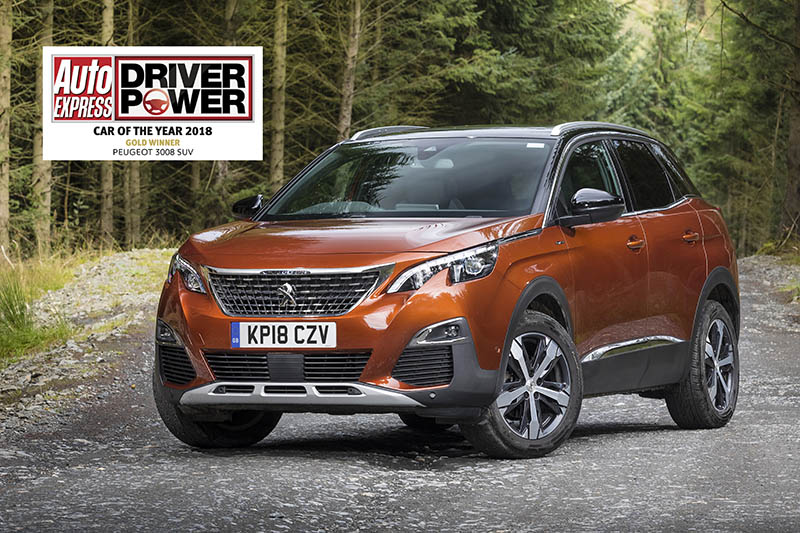 Since launched in late 2016, the 3008 SUV has been a huge success for the Peugeot brand, with over 350,000 units sold worldwide. It brings to market the latest technology with its unique Peugeot i-Cockpit®, offering a more intuitive and engaging driving experience, thanks to a compact steering wheel, head-up digital instrument display and capacitive touchscreen.

Wesley Lang, Senior Research Manager at Driver Power, commented: “The Peugeot 3008 SUV is the best performing Mid-Size SUV in five of the nine Driver Power judging categories: Exterior; Practicality & Boot Space; Ride & Handling; Safety Features; and Reliability & Build Quality. The 3008’s performance proves that SUVs can excel in many judging categories, long thought to be the domain of smaller vehicles. What is especially notable is that overall the 3008 SUV ranks third in Ride & Handling and fifth in Reliability & Build Quality across all ranked vehicles.”