A Peugeot 205 GTI, featuring a 405 Mi16 engine, will make an appearance at this year’s CarFest South in the UK.

The 205 GTI that has been restored and modified by a team of Peugeot apprentices, will be one of several models available for passenger rides, on which festival-goers can place bids as part of the Dream Rides event from The Sporting Bears Charity. All proceeds from the auction will go to the charity and the winning bidder will experience a passenger ride in the 205 GTI, including a spin on the CarFest track. 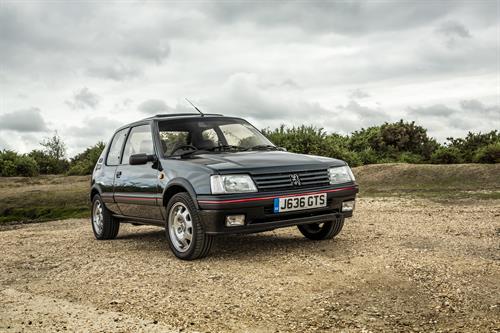 The Sporting Bears Charity is a dedicated group of classic and sports car enthusiasts, who aim to raise money for children’s charities through social and touring events. This year, the charity raised £50,000 at CarFest North and to date, have raised nearly £500,000 by volunteering their own cars for CarFest goers.

The Peugeot 205 GTI did not feature in The Sporting Bear’s auction at CarFest North in July, but received many requests for bids. The popularity of the 205 GTI at the show led to its return for CarFest South and its involvement with The Sporting Bears auction.

Originally factory built in 1991, the 205 GTI is fitted with the French marque’s 405 Mi16 engine. The car was purchased as a restoration project for the Peugeot Technician Apprenticeships Program.

The project was part of the Above & Beyond program, run by the Performance Academy for all apprentices enrolling from the UK Dealer Network.

The work conducted by the apprentices focussed on technical modifications, including installing the new engine, suspension and transmission modifications they felt would maximize the car’s ability without losing the car’s iconic looks and performance.