The Original Equipment Suppliers Aftermarket Association (OESAA) attracted a record number of garage owners and technicians onto its stand at Automechanika Birmingham 2017.

OESAA’s very own on-stand seminar theatre proved to be a popular hit at the event as industry expert guest speakers Andy Savva and Frank Massey drove home the benefits of buying genuine parts from OE suppliers to a garage’s reputation and profit-margin.

Andy and Frank offered valued tips and advice to help educate garage owners and technicians about the confidence-boosting effects of choosing genuine OE suppliers’ parts from their local motor factors, while also warning about the potential pitfalls of cheaper alternatives.

“We’re explaining how genuine parts can benefit your workshop businesses in terms of reputation and the profit margins they can bring,” Andy explained. 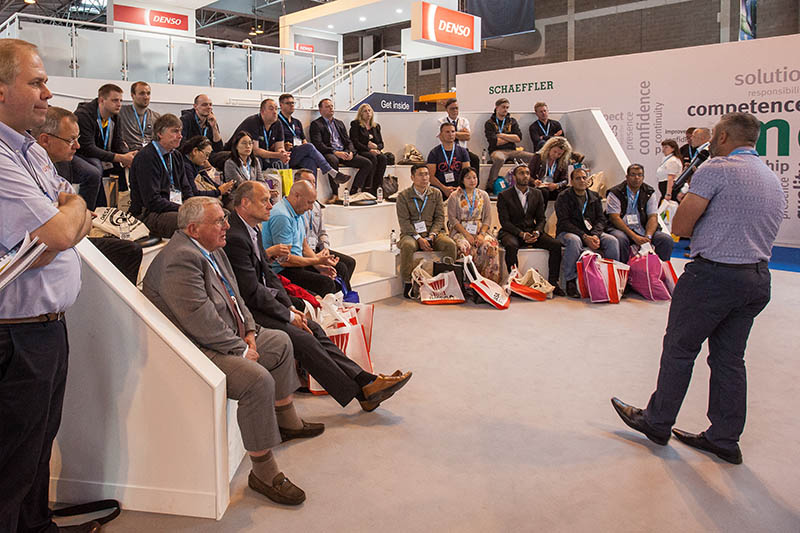 Demonstrating the shocking reality of sub-standard ‘equivalents’, examples of cross-sectioned OE and vastly inferior non-OE components were also a big talking point at the exhibition.

OESAA’s Eunan MacGuinness said: “We’re getting garage owners and technicians to understand why they should be using genuine parts from OE suppliers.

“We’ve got a non-OE torsional vibration damper that, from the outside, looks like it’s got a rubber seal in but actually it’s just a little groove that’s been cut out.

“It weighs twice as much as the OE part, there’s no dampening in it at all so it’s actually going to create more vibration somewhere else on the vehicle.”

Other cross-sectioned components appearing on the stand included wheel bearings and gearbox mountings.

“The majority of technicians will have only ever seen a complete part before, so the when they look inside these parts and see the difference, it is quite shocking for them,” Eunan added.

Automechanika Birmingham, the UK’s leading exhibition for the aftermarket and supply chain, was this year 70 per cent bigger with over 800 exhibitors attracting more than 12,000 visitors.

Andy added: “We saw a lot more garages this year and we had some really interesting conversations with them on the OESAA stand.

“If you want to stay in this industry and succeed, it’s essential to be aware of what you’re fitting.”

For further information on OESAA and all forthcoming exhibitions, visit http://www.oe-suppliers.org/.