Nissan has called on Irish businesses to reassess their green credentials after unveiling new technology which enables the drivers of electric vehicles to use their cars to power their businesses and homes and to feed energy back to the power grid.

The innovative Nissan X-Storage technology is a game-changer for Irish businesses who want to reduce their carbon footprint, to become more sustainable and to significantly reduce their operating costs by running a fleet of electric vehicles.

Nissan is already using the new technology together with sustainable solar energy to power its new Dublin headquarters at Park West Business Park which were officially opened today, July 23, by the Minister for Communications, Climate Action and Environment, Richard Bruton, T.D.. 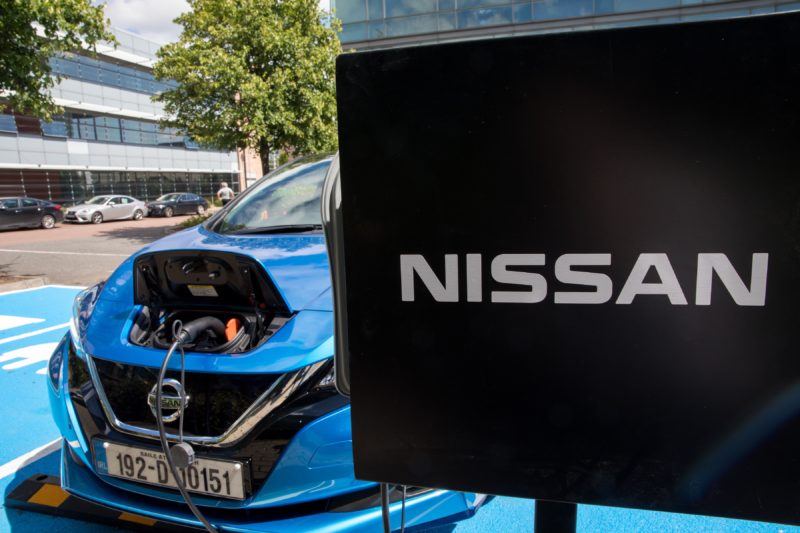 The Nissan X-Storage system which was unveiled at Nissan’s newly refurbished headquarters can also draw energy from the Nissan Leaf electric vehicles parked outside, thanks to their built-in bidirectional charging capacity which makes it possible to supply the energy stored in the car’s battery back to the three-storey building.

Nissan is also driving Ireland’s green revolution by expanding its own fleet of electric vehicles.

The Nissan Leaf and Nissan ENV200 now accounts for 60 per cent of the cars that it has on the road. 16 charging points for EV drivers are currently being installed at its new headquarters.

New LED lighting has been fitted to reduce the electrical load on the newly refurbished building. Smart controls have also been installed to ensure that the building is powered down at night and internal bicycle storage facilities have also been provided for employees.

Speaking at the opening of Nissan’s new headquarters, James McCarthy, CEO of Nissan Ireland said that it was incumbent on the entire business community in Ireland and all Government departments to start auditing their carbon footprint and to take the necessary steps to reduce it.

He said: “Businesses and government need to evaluate their environmental credentials including looking at their fleet and company car policies to determine whether they are part of the problem or part of the solution. In addition to the clear environmental benefits from doing so, there can also be significant financial savings for businesses bottom line in the form of Accelerated Capital Allowance benefits, zero per cent BIK and vehicle running costs savings.”

Mr. McCarthy called on Government to play it’s part by reviewing the national vehicle fleet funded by the Exchequer, most particularly the “grey” mileage fleet, and to make the commitment now to sign up to the Government Fleet Declaration first mooted in 2016 at the Marrakesh Climate Change Conference which recommended 20 per cent of all Exchequer funded fleets should be electric vehicles.

Mr. McCarthy added: “At Nissan we are absolutely committed to becoming a more sustainable business and to continuing to reduce our carbon footprint and to helping businesses and householders to follow our lead.

“Nissan is changing how cars are integrated into society. Nissan Leaf drivers can now use their zero emissions electric cars for much more than just driving. We have made it possible for them to easily connect their cars with energy systems to charge their batteries, to power their homes and businesses or even feed energy back to power grids and earn energy credits.” 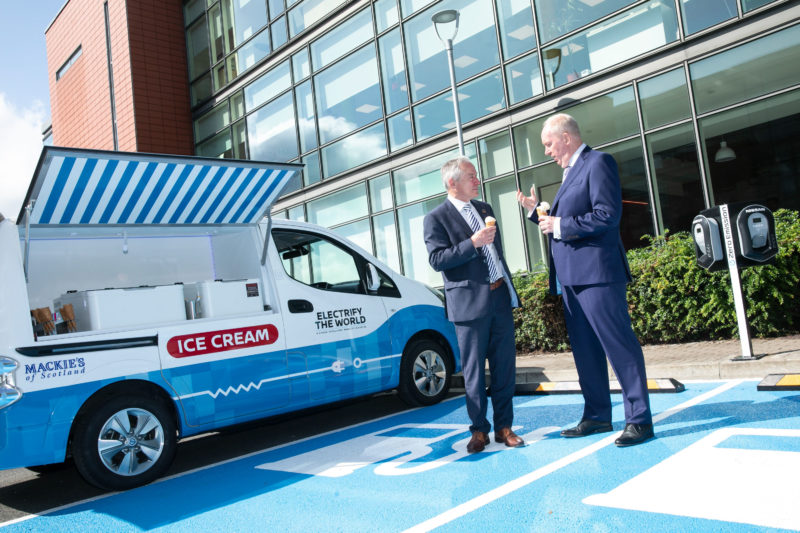 The Nissan Energy X-Storage System – which will be available to buy next year – can be installed in homes and businesses to store energy from the mains electricity supply, especially at night when electricity is cheaper, or from renewal energy sources such as solar panels.

This energy can then be used at a later stage or at peak times to charge electric vehicles and to power homes and businesses. Nissan Leaf owners can also use the Nissan X-Storage System to supply the energy stored in their car’s battery back to power supply grids.

Mr. McCarthy concluded: “We are also changing the way ice-cream is sold! While the presence of a zero emission ice-cream van may appear frivolous it makes a very serious point about how we can look at the way we traditionally do things and change them for the better. The fumes that idling vans release are highly toxic, they are dangerous to children and don’t make for a great “99” experience. A better future for our children is possible and we have just proved it! Beautiful ice-cream with zero emissions.”