The vibrancy, colour and excitement of Brazil has been captured in the Nissan EXTREM, a radical concept car aimed squarely at young (and young-at-heart) car enthusiasts keen to make a statement on the roads.

EXTREM has been created especially for Brazil. It has been designed for and built in the country and has its world debut at the 27th Sao Paulo International Motor Show (24 October – 4 November).

“Brazil is a country of great natural beauty and it has a passionate, rich culture. But this is not always reflected in the cars on its streets, especially the more affordable locally produced vehicles which tend to be conservative in design, colour and specification,” said Shiro Nakamura, Senior Vice President and Chief Creative Officer. 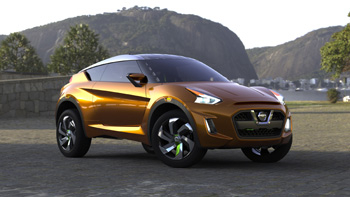 “EXTREM, with a dynamic, high-character design, is far from conservative. It was created to appeal to the country’s growing band of city-based young professionals who are passionate about design and want to make a personal statement. The lightweight two-door 2+2, has a dynamic stance, fresh surfacing, and a clear rugged ability to tackle the urban jungle everyday,” he added.

Designed by Nissan Design America (NDA) in San Diego, California, in collaboration with Brazilian designers and produced in Brazil, the concept previews a new breed of car. By blending versatility and toughness with the agility of a compact 2+2, EXTREM is a new genre of urban compact sports car.

Its unveiling at the Sao Paulo Motor Show underscores Nissan’s commitment to Brazil. The country is one of the largest new car markets in the world and one in which Nissan enjoys significant sales growth. The company claimed almost two per cent of the 2011 market, doubling its 2010 sales, and aims to account for five per cent of new car sales in Brazil by 2016.

Nissan’s investment in Brazil includes an all-new manufacturing facility in Resende in the state of Rio de Janeiro, which is scheduled to start production in the first half of 2014. When operating at its full potential, the plant will produce 200,000 units annually.

Although strictly a concept car with no immediate plans for production, elements of EXTREM’s styling offers a glimpse into future Nissan products, for Brazil and beyond.