The Northern Ireland Car of the Year Awards, organised by the Ulster Motoring Writers Association, returns to the fore this year with the help of local finance company NIIB. 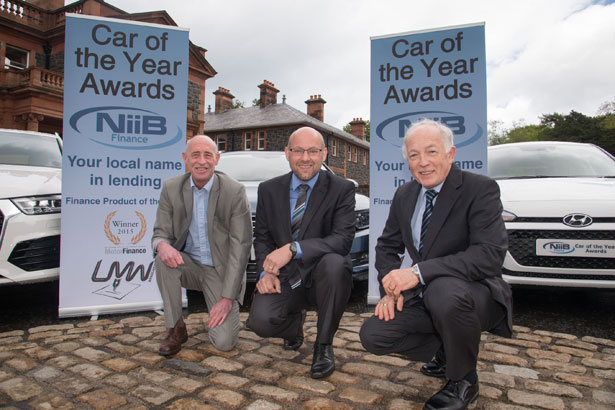 Pictured at the launch of the awards at Cultra Manor where the awards will be held later this year are: Paul Flowers, Editor and Motoring Correspondent, Spectator Newspapers; James Dempster, Regional Manager NIIB Finance and Jim McCauley, Chairman, Ulster Motoring Writers Association.

The resumption of the awards in association with a major sponsor is a sign of the growing improvement in the Northern Ireland new car market which rose by over 9 per cent in 2014, matching the UK average.

The awards are judged by members of the Ulster Motoring Writers Association who test the cars on Northern  Ireland’s roads covering a combined mileage of over a quarter of a million miles every year.

Chairman of the UMWA, Jim Mc Cauley, said,” The Association is delighted to have such a high profile sponsor for this annual evaluation which is intended to guide the buying public to what are the best value and most competent cars in each of the judging categories.”

James Dempster is the Regional Manager for NIIB Finance who said: “For many years NIIB have aimed to provide the best service and support available to Retail Customers, Business Users, Fleet Users and Motor Trade. Sponsoring these awards demonstrate our continued commitment to the local Northern Ireland market whilst continuing our growth throughout the rest of the UK.  NIIB remains the local name in lending.”