Its Ford Fiesta WRC, fitted with NGK spark plugs and NTK Lambda sensors, came out on top in the 2017 Autosport Awards’ Rally Car of the Year category after out-performing factory teams from Citroen, Hyundai and Toyota. 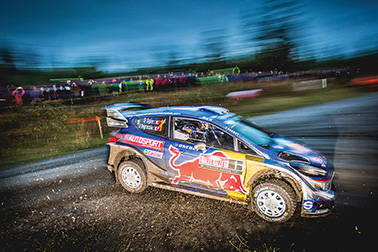 Malcolm Wilson’s Cumbrian-based team won the 2017 WRC title as well as taking Sebastien Ogier to the drivers’ title and helping Ott Tanak and Elfyn Evans to individual rally victories.
“This year’s been very special,” said Wilson as he received the award at the Grosvenor House Hotel on London’s Park Lane.

M-Sport has retained Ogier, who was named Rally Driver of the Year for the fifth successive year, and Evans for 2018.

Mark Hallam, Marketing Manager, NGK Spark Plugs (UK) Ltd, said: “It has been great to have worked with M-Sport in what has been an incredibly successful year for the team acknowledged by this richly deserved accolade. Many of our customers are devoted fans of WRC and have followed the M-Sport team throughout what has been a memorable season.”

The company has a long and illustrious history in motorsport, sponsoring some of the most successful teams and competitors in Rally, Formula One and other championships, helping them to achieve numerous world titles.