NGK-sponsored M-Sport delivered the dream result at the Dayinsure Wales Rally GB – securing the FIA World Rally Championships for drivers, co-drivers and manufacturers as well as the rally win.

As Sébastien Ogier and Julien Ingrassia clinched their fifth FIA World Rally Championship title, Elfyn Evans and Daniel Barritt secured a maiden victory in Wales to make it a memorable weekend for the Cumbrian-based team. 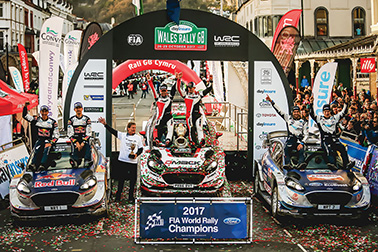 Team Principal, Malcolm Wilson OBE, said: “It really was the Triple Crown, and a very emotional day for all of us. We have a great team of people and their hard work has resulted in something truly amazing. We’ve been on the podium at every event and we’re the only team to have had all three drivers secure a win this year. The Fiesta has proven itself to have the performance and the strength, and that is down to the tireless hours that every single member of the team has put into this incredible achievement.”

Mark Hallam, Marketing Manager, NGK Spark Plugs (UK) Ltd, said: “We would like to pay tribute to the whole M-Sport team for their fantastic performance this year. To achieve a triple success was a truly magnificent feat. I’m sure all our customers who follow WRC will have been thrilled to see the team secure such a well-deserved victory in Wales and take the drivers’, co-drivers’ and manufacturers’ titles.”

Evans and Barritt secured their first win in style, claiming nine stage victories. As the first British pairing to win the event since Richard Burns and Robert Reid in 2000, Evans is also the very first Welsh driver to win the British round of the FIA World Rally Championship.

He said: “I’m feeling pretty good, and just about managed to keep the tears away at the podium. It’s been a really long and difficult weekend, so this one feels good and it was made all the more special when you combine it with everything the team has achieved today.”

Ogier and Ingrassia’s fifth successive title makes them one of only three crews to have secured the crown with two different manufacturers.
After finishing in third place in the rally, Ogier said: “I felt immediately proud and very happy for the team. A drivers’ title is something that has never happened for them and it was so well deserved. What they are able to do is amazing. Really, a big thanks to all of them.”

The weekend’s performance took M-Sport to 398 points in the manufacturers’ standings going in to the final event, the Rally Australia on November 16-19.

Ogier now has 215 points in the drivers’ championship, with team-mate Ott Tanak, who with his co-driver Martin Järveoja finished in sixth place in Wales, in third position on 169 points, just 14 behind Thierry Neuville in the Hyundai 120 Coupe. Evans is in fifth place on 118 points, 18 behind Jai-Matti Latvala’s Toyota Yaris.