The Hancock Haj Grand Prix (HHGP) team will include 2012 World Champion Chris Holder who will line-up in the FIM Speedway Grand Prix series alongside Greg and Czech rider Vaclav Milik. 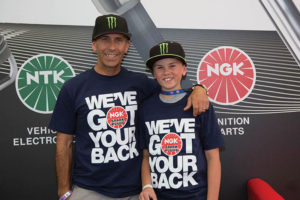 Hancock and Haj have spent the past few months coming up with the concept and speaking to sponsors, riders and associates, with the aim of introducing a team concept to the SGP Series for the first time since the mid-1990s, when Hancock was a pioneer alongside fellow American Billy Hammill when they rode for ‘Team Exide’.

He is relieved to have long-term Australian friend and on-track rival Holder in the team with him for its inaugural season.

The American said: “Right from the onset I wanted Chris with me in the team and it was just a case of reaching out to him and seeing if it’s something he wanted to be a part of.

“Everyone knows the talent he has, he is an amazing rider, but he’ s also a great guy and a good friend so it made sense to have him in. Chris has so much more to show people and we want to really help him to get the best out of himself and we think we’ve created an environment that will benefit him.” Jus
Hancock is also delighted to sign-up Milik who has been named as second reserve for this year’s Grand Prix series and who he followed closely when he was forced to withdraw from the 2017 series with a shoulder injury.

The Californian legend said: “When I was injured, I had some time to watch some guys a little bit closer and Vaclav was one of those that I was really impressed by. He was awesome in the GPs he raced in.

“Rafal has worked with him quite a bit over the last couple of seasons and he is a big fan. He works really hard and he wants to learn and improve. You can see in his scores how much he is improving. Every year he seems to get better and I think he was probably a little bit unlucky to be only second reserve next year.”

NGK Spark Plugs (UK) Ltd – the leading supplier of original equipment (OE) spark plugs, glow plugs and NTK Lambda and other engine management sensors – has been a long-time supporter of Hancock and announced last July that it is sponsoring his 12-year-old son Wilbur.

For more information on NGK Spark Plugs (UK) Ltd and its products and services, please visit the website www.ngkntk.co.uk Also you can check out its blogzine at ngktorque.com