The five-time World Champions have been busy testing in readiness for the 2018 WRC season which gets underway with the Rallye Monte-Carlo on January 25-28 and said they will be going all out to defend their title in 2018 as well as helping M-Sport retain the manufacturers’ championship.
Sébastien said: “Everyone is working hard in preparation for the new season. It will be difficult as there are a lot of good teams with strong drivers who we will be competing against, but obviously we will be trying our best.

“There won’t be any major changes with the car, but we are obviously looking to see if we can make improvements to the engine, chassis and components. We don’t expect big, big changes. 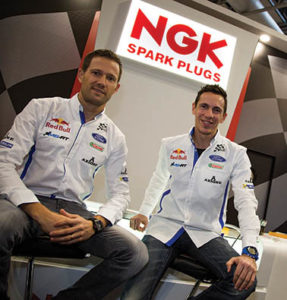 “The season kicks off in Monte-Carlo, which is special, and we will be doing our best to stay away from trouble, but it won’t be until after the first three events that we will get a real idea of how we expect the season to go.

“I know the NGK brand well and know they are one of the partners who helped make the car really reliable last season and they are working together with us again this season.”
Also driving for M-Sport next season will be Elfyn Evans, who with Daniel Barritt secured a maiden victory at Dayinsure Wales Rally GB last season, and who also visited the NGK stand, and Teemu Suninen and Mikko Markkula who will take to the wheel of the Cumbrian squad’s third Ford Fiesta WRC in eight rounds of the 2018 championship.

NGK Spark Plugs (UK) Ltd has a long and illustrious motorsport pedigree, helping some of the most famous Formula One, Rally and other two four-wheel teams and racers to numerous victories and titles.

The company is a big supporter of women who compete in motorsport and was visited by ‘Queen of the bikers’ Maria Costello MBE and Charlie Martin who has just announced she is to drive for the Richardson Racing team in the Ginetta GT5 Challenge this season.
Mark Hallam, Marketing Manager, NGK Spark Plugs (UK) Ltd, said: “It was fantastic to be able to kick off day one of the show with the visit of Sébastien and Julien and then to meet up with Elfyn the following day. They were great and posed for pictures with fans and signed autographs. Nothing was too much trouble for them. They even signed our stand!

“We have a great relationship with M-Sport and are proud to be associated with the team and to hopefully help them retain both the drivers’ and manufacturers’ championships this season.

“Autosport International gives us the opportunity to meet up with a number of motorsport competitors who we support, such as Maria and Charlie, and also engage with enthusiasts of all forms of motorsport who follow the teams and drivers we support and whose own vehicles are invariably fitted with our spark plugs, glow plugs and NTK sensors.”
NGK’s stand featured Lee Cohen’s 1700hp Ford Zephyr drag car. The 16ft long vehicle, which is based on a 1955 model and fitted with NGK spark plugs, runs in the super pro class and has run a best time of 6.7 seconds at 203mph.
Visitors also competed on a ‘Game Pod’ racing simulator on each day of the show when they had the chance of winning a remote-controlled Ferrari 458 model car.
For more information about NGK Spark Plugs (UK) Ltd and its products and services, please visit www.ngkntk.co.uk You can also check out its blogzine at ngktorque.com