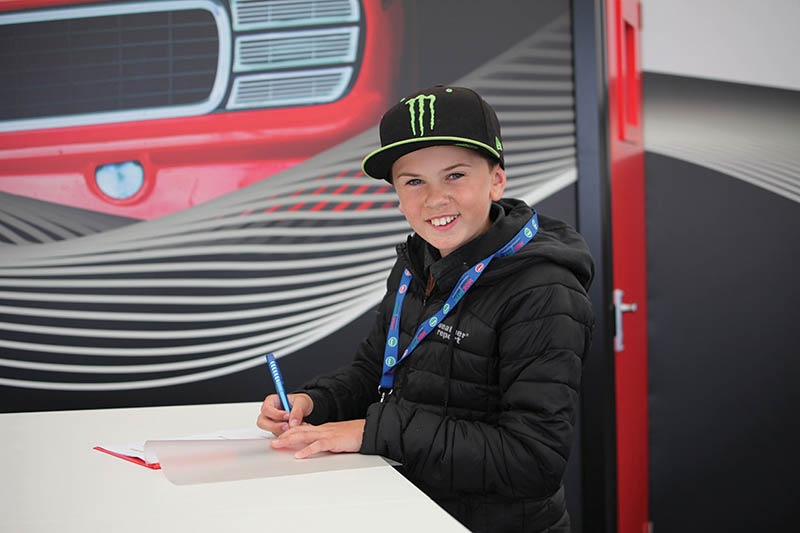 The ignition specialist has had a long-standing relationship with current and four-time champion Greg and is now sponsoring his eldest son.

Wilbur, who first took to the track aged just seven, currently rides with Eldarna in junior league Speedway in Sweden, where Greg lives with his wife Jennie and other sons Bill and Karl during the European racing season.

The sponsorship was organised by NGK’s John Money, a keen Speedway fan.
Californian Greg said: “John contacted me about the possibility of supporting Wilbur and I said ‘fine’ but got him to speak with him direct. John and NGK always roll out the red carpet for us and that goes a long way so I was happy to let Wilbur deal with John direct.”

Wilbur said: “I couldn’t believe it when Dad said NGK were keen to sponsor me. I thought ‘is this really happening?’ To get NGK as my first primary sponsor is really cool and we’ve already been talking about new suit designs. I love everything about Speedway, going sideways, the speed and the sound. It’s great.”

Greg said Wilbur has made a promising start to his Speedway career.

He said: “He’s a great kid. He likes school and is keen to learn. He’s very relaxed and with his current desire and willingness to improve he could go a long way. He’s certainly got the potential to go far.”

Mark Hallam, Marketing Manager, NGK Spark Plugs (UK) Ltd, said: “We are delighted to announce that we are supporting Wilbur in the early stages of his career. We have had a long and successful relationship with Greg over many years and he is a great ambassador for both the sport and ourselves so it is great to see the family relationship continuing.”

Greg (47) is currently in seventh position in this season’s World Championship standings after being beset by a number of mechanical problems in the early rounds of the season.

However, he is confident of doing better in the second half of the season and is looking forward to the British Grand Prix in Cardiff on Saturday, July 22.

He said: “I love racing in Cardiff and the red, white and blue flags displayed by the British and American fans makes it feel like a real home from home. I’ve changed my engine tuners so hopefully I will be in the mix in the remaining rounds of the championship.”