The NGK-backed M-Sport Ford World Rally Team has got off to a winning start at the iconic Rallye Monte-Carlo.

The team is already leading the FIA World Rally Championships for manufacturers, drivers and co-drivers courtesy of a sixth Rallye Monte-Carlo victory for Sébastien Ogier and Julien Ingrassia and a resurgent fight-back to sixth place for Elfyn Evans and Daniel Barritt. 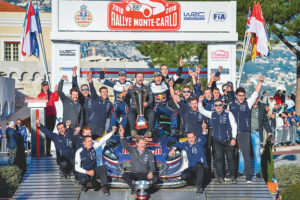 Current and five-time World Rally Champions Ogier and Ingrassia led from start to finish to secure a fifth consecutive victory at Rallye Monte-Carlo as they began their championship defence.

Sébastien Ogier said: “We always face tough conditions at Rallye Monte-Carlo but this year they were really extreme. I don’t think I’ve ever struggled so much with the tyre choices, so to have come out on top is fantastic.

“I think everyone made mistakes this weekend – myself included – but it was almost impossible to have the perfect drive. Luckily, we only had some small mistakes and once we had a good gap it was just a case of trying to manage it – but that is never easy in these conditions either!

“It’s the best way to start the season and I need to congratulate the team because everyone has worked really hard and I know that they will also be super happy with this result. The competition is going to be stronger than ever and we’ve made a strong start which is really important.”

Britons Elfyn Evans and Daniel Barritt picked up a puncture on the very first stage, losing more than three minutes to the leading pack, but fought their way from 16th to sixth position.
Bryan Bouffier and Xavier Panseri also impressed in difficult circumstances. Bouffier was forced into a last-minute co-driver change just hours before his competitive debut with the team.

When Jerome Degout sustained an injury on the pre-event reconnaissance, Panseri was drafted in fresh from his sixth-place finish at the Dakar Rally. Despite the pairing’s limited preparations, they rarely put a foot wrong and delivered a controlled and intelligent drive to eighth place overall.

Mark Hallam, Marketing Manager, NGK Spark Plugs (UK) Ltd, said: “It has been a great start to the season by the M-Sport Ford World Rally Team and I’m sure our customers who are devoted rally fans will be following the team as they fight to retain the drivers’ and manufacturers’ titles over the course of what is sure to be a thrilling season.”

For more information about NGK Spark Plugs (UK) Ltd and its products and services, please visit www.ngkntk.co.uk You can also check out its blogzine at ngktorque.com