The motorsport enthusiasts purchased a range of NGK merchandise at the four-day show to raise £913 for Macmillan Cancer Support. 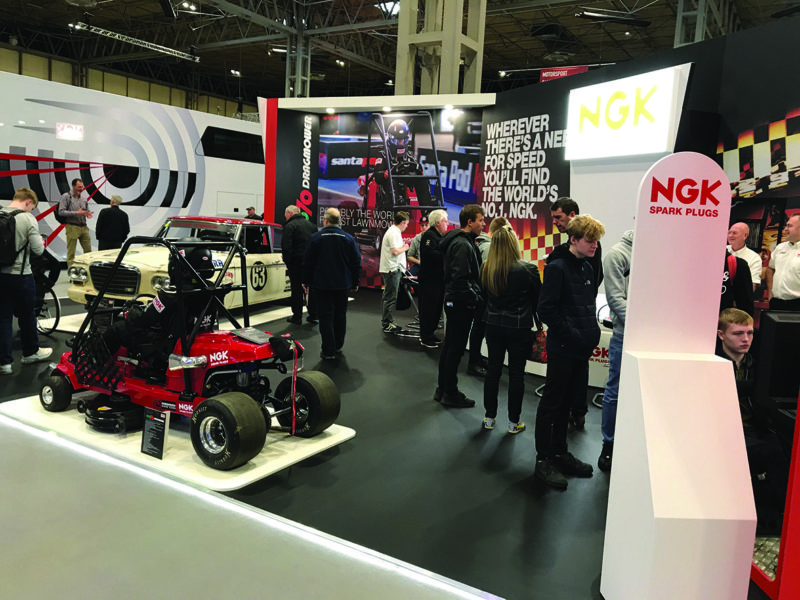 NGK took centre stage at the event at Birmingham’s NEC where it exhibited its MO70 Dragmower which is believed to have become the fastest lawnmower over 1/4 mile after completing the distance in just 9.49 seconds with a top speed of 115.53mph and also the fastest accelerating lawnmower by reaching 102.64mph in 5.44 seconds.

The original ride-on mower, on which MO70 was based, has been transformed by seven-time British drag racing champion Andy Robinson and was piloted by NGK’s Scottish sales representative John Catterson at Santa Pod Raceway in Northamptonshire. John was present on the NGK stand to be reunited with the flying machine for the first time since its dramatic track debut last October.

The stand also featured Andy’s classic 1963 American Studebaker Lark car, together with a game pod where enthusiasts tested their driving skills on a track simulator with the fastest show participant winning an Xbox One.

Mark Hallam, marketing manager, NGK Spark Plugs (UK) Ltd, said: “Autosport International attracts thousands of motorsport fans and it was great to meet so many of them on our stand as well as some of the many motorsport competitors we support. I would like to thank everyone who bought NGK merchandise at the show and in doing so helped raise funds for Macmillan Cancer Support.”