Hyundai Motor is introducing a refreshed i20 line-up. In order to meet customers’ expectations, the i20 five-door now has a more modern design as well as updated safety features with Hyundai SmartSense.

For both the five-door and the three-door coupe, depending on the market, Hyundai is also introducing a seven-speed dual clutch transmission (7DCT) for optimal driving comfort and an Idle Stop and Go (ISG) system, which will reduce CO2 emissions. Offering a choice of three different petrol powertrains, New i20 meets current market demands.

“The i20 is one of our DNA models and has continuously been one of our top-selling cars in Europe for a decade. The i-range is the strong foundation of our brand’s success in Europe”, says Andreas-Christoph Hofmann, Vice President Marketing & Product of Hyundai Motor Europe. “By updating the New i20 in design, safety, connectivity and powertrain line-up, we are continuing to meet the expectations of our customers to ensure the ongoing success of this model range.” 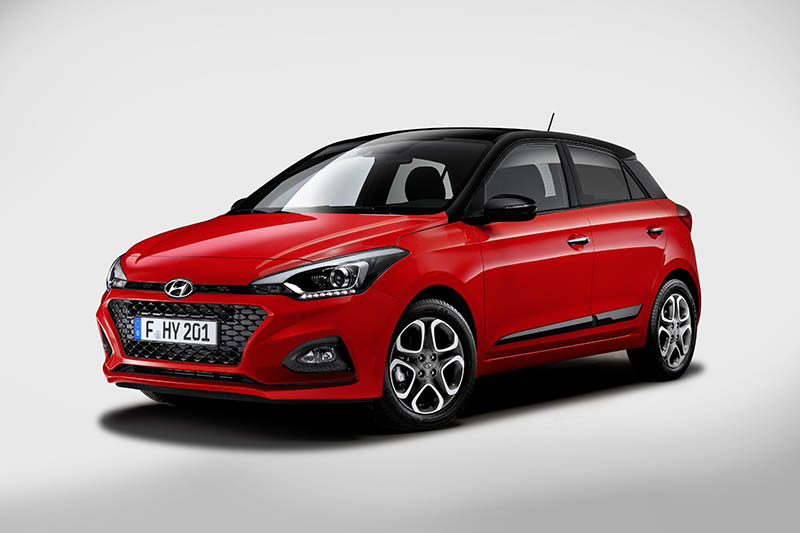 The styling of the i20 has been refreshed in several ways. The elegant lines of the New i20 emphasise its sophisticated exterior. The front of the i20 five-door now features the Cascading Grille, the family identity uniting all Hyundai models. In addition to its modern and fresh design, the New i20 also boasts a spacious and comfortable interior.

In order to make the New i20 more appealing and give it more character, the front of the five-door now features redesigned front bumpers including the Cascading Grille. The rear of the i20 five-door also has updated bumpers and rear combination lamps, creating a more dynamic look. The tailgate has been reworked to integrate the license plate. Also, Hyundai has created a bolder appearance for the i20 five-door by adding new 15”- and 16”-alloy wheels.

Customers can also choose from eight distinctive colours for the exterior: Tomato Red, Champion Blue and Clean Slate are new colours in the i20 range, on top of the existing colours Passion Red, Sleek Silver, Stardust Grey, Polar White and Phantom Black.

Hyundai claims that drivers of the New i20 also benefit from outstanding roominess, with an uncompromised boot capacity of 326 litres (VDA).

The Idle Stop and Go (ISG) is a standard feature on all i20 versions, which will contribute to lower fuel consumption, lower CO2 emissions and higher efficiency. The fuel savings of using the ISG will be especially apparent when driving in urban areas, as ISG automatically switches off the engine when the car comes to a halt.

By concentrating on efficient petrol engines in the i20 range, Hyundai is responding to market demands. The 1.0 T-GDI is now equipped with a built-in particulate filter to enhance environmental performance. The whole i20 powertrain line-up is fully compliant with Euro 6d temp regulations.