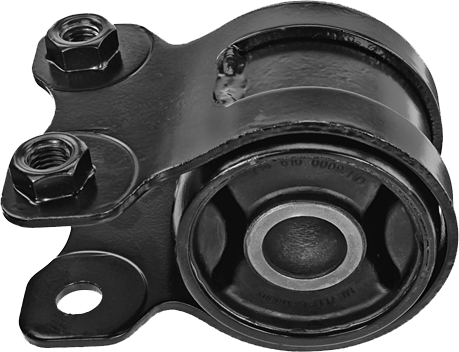 By replacing the control arm’s hydro bushing with a full-rubber mount the company’s engineers say they have significantly increased the part’s service life compared to its OE equivalent. To maximise the component’s load-carrying capabilities and the vehicle’s handling performance the rubber material used on this pioneering Meyle HD part has been designed using calculation models of the Finite Element Method (FEM).

The hydro bushings fitted on original control arms of the second-generation Ford Focus and Volvo S40/V50 models are known to fail prematurely, the company says.

The cause: Interacting with ozone, the rubber material is prone to age quickly, making it porous over time with the formation of micro cracks as its consequence, causing fluid to leak from the bushing. The loss of hydro liquid will manifest itself immediately during driving as deterioration in the vehicle’s responsiveness and road holding characteristics.

Frequent customer complaints over the original parts prompted Wulf Gaertner Autoparts AG’s engineers to study the problem of early failure and find a way of eliminating its root cause.

The solution is a new bushing design, which, unlike the original hydro mount, contains no fluid, but manufactured exclusively from steel, aluminium and high-grade natural rubber. The Meyle HD bushing is therefore immune to premature failure caused by fluid leaks. To ensure superior load-carrying capabilities the forces acting on the components have been calculated using the Finite Element Method (FEM), allowing the Meyle bushing to provide for the same dynamic driving properties as the OE hydro bushing. The Meyle bushing is available individually, thereby simplifying repairs, as it is no longer necessary to replace the complete control arm when only the bushing is worn out.