With their second SUV launch in as many months, Mercedes-Benz has introduced further choice to their compact SUV model offering with the arrival here of their much heralded new GLB with an entry-level price of €42,350. The new GLB arrives against a backdrop whereby every third vehicle produced by Mercedes-Benz is an SUV and every fourth a compact car. 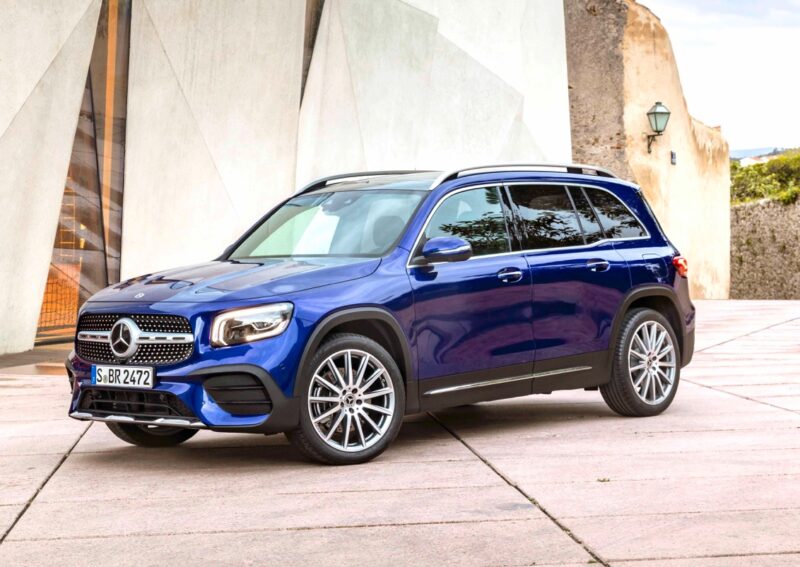 Ranked as the first Mercedes-Benz in its class to offer a 7-seat option, models with this feature come with a third row of seats concealed beneath the luggage floor that can be raised to expand capacity to a seven seat layout as required. Fully retractable, the two extra seats are said by Mercedes-Benz to provide ‘comfortable seating for passengers up to a height of 1.68m’. Within this layout, second row seats also split 40.20.40.
Raising their SUV range to what their sales manager Ciaran Allen calls ‘an entirely new level of desirability’, the new GLB joins other SUV derivatives within a family of Mercedes-Benz compact cars of which some seven million have been delivered since A-Class was first introduced over two decades ago.
Aside from its passenger capacity, the new GLB is said by Ciaran Allen to ‘redefine the definition of a compact car’ by delivering what he terms ‘exceptional levels of spaciousness’ with plenty of room in all dimensions’. At 2,829mm, it has the longest wheelbase of Mercedes-Benz’s current compact generation. Front headroom is 1,069mm with rear legroom in the five-seat version said to be ‘especially comfortable’ at 967mm.
Powerful in its proportions and imposing in its appearance, it has a distinctive exterior true to the off-road focus of its design. This is evident in its upright stature, bold frontal appearance, striking headlamps, railed roofline, short front and back overhangs, and in its elegant yet decisive rear end. Optional is 4MATIC all-wheel drive and a special off-road light which helps the driver to detect obstacles at low speeds.
Available in two design and equipment lines – Progressive and AMG – its numerous options include a ‘night package’ in which black high-gloss body highlights give it a distinctive look. Coming later will be a special order Edition 1 model with exclusive boldly coloured bodywork.
Inside, it has a high-quality attractiveness in which its off-road design influences are echoed in its instrumentation and controls elements, steering column, spiral-look dashboard, doors and centre console highlights. Fitted with the acclaimed MBUX user experience and ‘Hey Mercedes’ command system, its other interior elements include two 7-inch instrument cluster and media displays with touch screen facility, a sports steering wheel with touch control.
Aside from a wide range of standard items, an extensive menu of optional choices includes comfort elements such as feel-good lighting, musical moods and seat massages features.
Powering the new GLB are updated 4-cylinder petrol and diesel engines, all characterised by increased power, improved efficiency and reduced emissions. Petrol models are all with 7G/8G automatic transmission – are: GLB 200 (1332cc/Nm 250 torque/), GLB 250 (1991cc/Nm 350) and GLB35 4MATIC AMG (1991cc/Nm 400).
Diesel models are all 1950cc with 8G automatic transmission – are: GLB 180d (Nm 280 torque), GLB 200d and GLB 200d 4MATIC (both Nm 320) and GLB 220d 4MATIC (Nm 400), each certified to Euro 6d and geared to meet Real Driving Emissions (RDE) Stage 2 requirements.
Equipped with comfort suspension with steel springs as standard, an adaptive damping system is optionally available.
Launched with what Ciaran Allen calls ‘the most competitive package possible tagging affordable prices to high-level specifications’, the focus in Ireland will fall on the following models initially – the GLB Progressive 180 Automatic from €42,350 and the GLB Progressive 180d Automatic from €43,190.