Hyundai has just launched their all-new Kona small crossover, which will take on the likes of the Nissan Juke, as well as the recently arrived Kia Stonic, and Citroen C3 Aircross. The entry-level Kona Comfort 1.0 Petrol Turbo 6 Speed starts from €20,995 ex works.

Like all of the above, the Kona has been designed to stand out from the crowd. It offers a completely new compact SUV platform and a bold, sharp design with a, two-tone roof option and the choice between ten distinctive exterior colors. 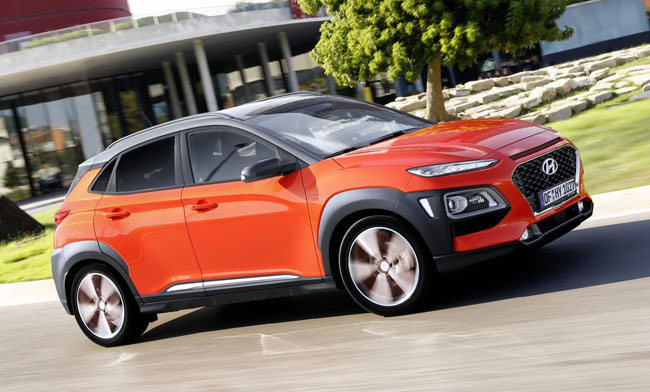 Standard equipment includes: 16 inch alloy wheels, air conditioning, roof rails, cruise control,
5” chrome screen, LED running lights, ‘Lane Keep Assist’, and a driver fatigue warning system.
It is slightly longer and wider than the Juke, but does not sit as tall. Because of the longer wheelbase, it’s bigger inside, with the boot space slightly larger than the Juke.

You can also expect the all-new Kona to have a high level of standard safety, technology and connectivity equipment.

The Kona uses a multilink rear suspension set-up, and a system it calls ‘Advanced Traction Cornering Control’, which is designed to improve traction as well as damping in bends.

Also expect the range to feature an all turbo-charged powertrain line-up at launch with likely 1.0 litre three-cylinder with 118bhp 175 bhp 1.6 4-cylinder with 7 speed transmission and 4WD on premium models. Targeted economy figures for these two versions are 38.7mpg for the 1.6 and 53.3mpg for the 1.0.

Expect a new 1.6-litre four-cylinder diesel engine in either 113bhp or 134bhp and also an electric version will follow late next year or early in 2019.

Hyundai Ireland boldly boasts that it expects the New Kona to be the best seller in the B- SUV segment next year following in the footsteps of the Hyundai Tucson, Irelands best- selling SUV in 2017.