The introduction of a fully electric vehicle to support the Lord Mayor of Cork’s duties is in line with Cork City Council’s 2020 – 2025 Corporate Plan which sets out the Council’s plans to lead in the creation of a more sustainable city. 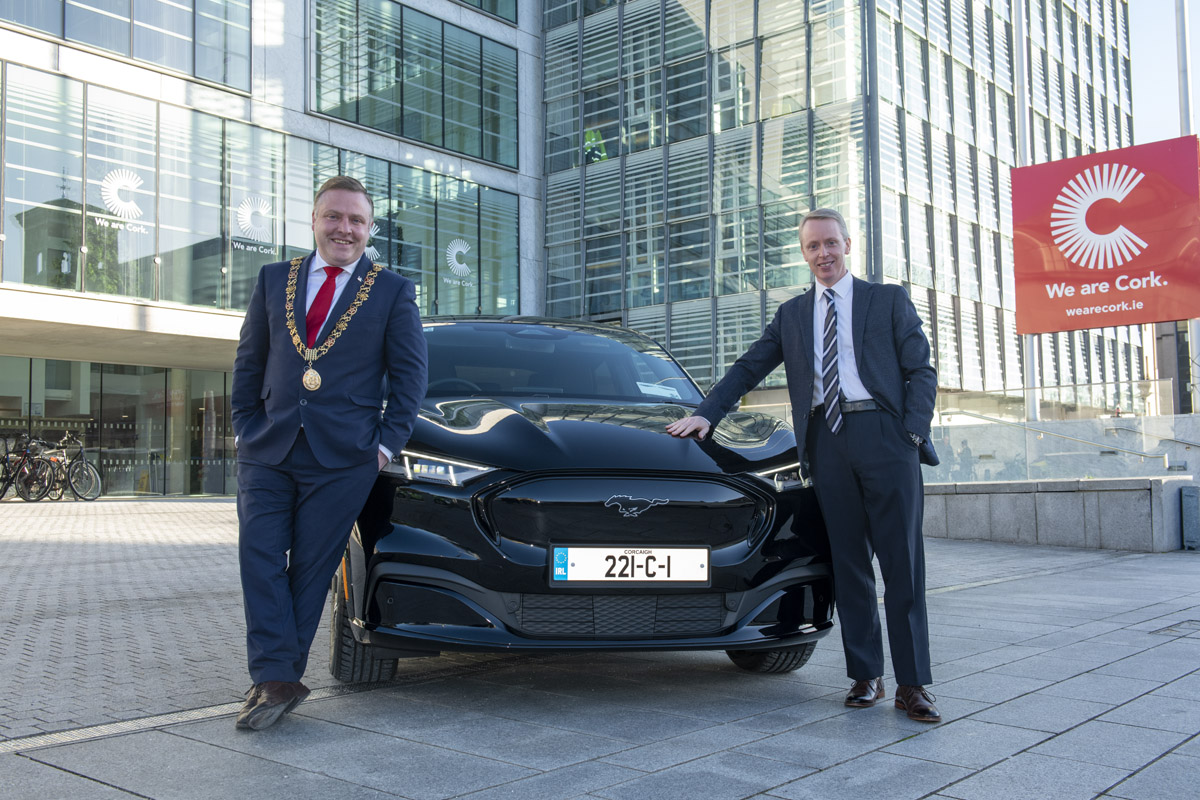 The fully electric SUV has a range of 400 kilometres and will be charged in the City Hall basement car park. Driving the Mustang Mach-E will lead to a 50 per cent cut in running costs compared to driving a petrol or diesel engine in a similar-sized vehicle.

In addition, given the less complicated engineering of an electric vehicle engine, servicing costs for the Mach-E will be considerably less than those for a similar-sized petrol / diesel powered vehicle.

Lord Mayor Cllr. Colm Kelleher said: “I am proud to be the first Lord Mayor to champion the use of a fully electric vehicle, which symbolises the Council’s commitment to tackling climate change.

“I want to take this opportunity to thank Henry Ford & Son Ltd. for their continuing support of the Lord Mayor’s Office. Finbarr, my legendary driver, has already christened the car: ‘Knight Rider’.

“I am also delighted that its range means that it can be driven to Dublin to cheer on Cork in the All-Ireland Final – after just one charge.”

John Manning, market lead, Henry Ford & Son Ltd. commented: “We are delighted to continue the tradition of providing our City’s Lord Mayoral car. We are even more excited that for the first time ever, our Lord Mayor will have the use of a fully electric car in the shape of our all-new Mustang Mach-E premium SUV with a range of 400km from a single charge.”

“The Mustang Mach-E is one of the most exciting vehicles that Ford has ever produced. This purpose-built all-electric vehicle is unique, unmistakably a Mustang and with leading edge assisted driving, parking and accident-avoidance technologies that ensured the car received a maximum five-star Euro NCAP safety rating.

“The car also received a five-star Green NCAP rating that promotes the development of cars that are clean, energy efficient and have a minimal environmental impact.”

“We wish Lord Mayor Kelleher many kilometres of safe and clean driving in his new Mustang Mach-E as he carries out his duties across Cork City and indeed, wider afield.”