Federal-Mogul Powertrain will launch a new, smaller version of its proven Rotocap valve rotator, the first for 4 valve per cylinder light vehicle engines, at this year’s IAA in Frankfurt, Germany.
The miniaturised design features an outer diameter in the range of 20-25 mm and allows the Rotocap to package into the valve assembly on automotive powertrains. Rotocap provides the enhanced valve rotation control required to compensate the challenges caused by reduced valve train lubrication and engine down speeding – two main design trends to achieve lower emissions and improve fuel efficiency. The new mini Rotocap will be marketed alongside Federal-Mogul Powertrain’s existing valve rotator products. 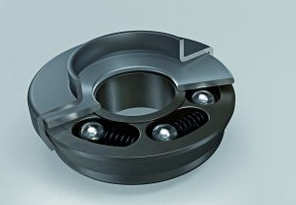 “The design function of Rotocap has been proven in the heavy-duty sector, where often engines run too slowly to generate consistent valve rotation,” explained Gian Maria Olivetti, Chief Technology Officer, Federal-Mogul Powertrain.“Today’s non-clamping cotters used in light vehicles, allow free rotation of the valve, transmitting spring loads via beads and grooves. However, this free valve rotation is limited in a speed range below 2500 rpm due to low dynamic effects. We can now apply the Rotocap technology to light vehicles, where downspeeding trends and increasing urban traffic density require engines to operate for prolonged periods at low speeds, and therefore may require forced valve rotation.Hybrid applications operating in a limited rpm range will also benefit from this technology.”

Rotocap provides forced valve rotation with enhanced rotation control, also at lower engine speeds. Valve rotation ensures an even distribution of temperature around the seat, increasing durability by reducing local distortion and avoiding blow-by and crack formation across the sealing surface. In addition, rotation reduces wear on other components in direct contact with the valve.

Rotocap eliminates uncontrolled rotation which normally – by torsion of the valve spring or by miscellaneous resonances – is transferred to the valve during its opening and closing movement. It is replaced with motion through a defined angular movement that only takes place as the valve opens – this controlled movement can be relied upon across the whole engine speed range. Rotocap also reduces abrasive wear of the valve seat area because the valve no longer rotates as it closes. This is particularly beneficial on engines designed with reduced oil consumption on the valvetrain or engines using alternative fuels (e.g. LPG, CNG, Ethanol) with generally higher seat wear ratios than gasoline or diesel.

Rotocap uses a compact and robust arrangement of balls and ramps within a self-contained assembly. The new small automotive Rotocap is available with an outer diameter in the range of 20-25 mm, which enables an easy implementation into the cylinder head. At the 2017 IAA Federal-Mogul Powertrain will exhibit a range of core valvetrain products such as valves, cotters and valve rotators, including its alternative design, Rotocoil, which uses a single garter spring in place of the balls and ramps. The company will be at Booth E33 in Hall 4.1 from 12-15 September (Press and Trade days only).