Following the successful launch of the new Renault Zoe Z.E. 40 in summer 2017, the new Kangoo Z.E. 33, which has the longest range of any electric LCV currently on the market, has also gone on sale here. The new Kangoo Z.E 33 is available from €28,190 after the SEAI grant of €3,800 (battery included).

Renault says that the new Kangoo Z.E. 33 has a longer NEDC range of 270km equating to 200km in summer conditions or 120km in winter. This extended range is achieved with an increase in battery capacity from 22 kWh to 33 kWh, which has been achieved by increasing the energy density of the battery’s cells without increasing size or weight – so there is no penalty in terms of load capacity or payload (605-640kg).

The winter range can be improved further by specifying the optional heat pump air conditioning, which is a world first for an LCV.

The new Kangoo Van Z.E. 33 also benefits from a new energy efficient motor, the R60 (5AQ 60), which is based on the motor that also powers New ZOE Z.E. 40. The R60 (5AQ 60) motor features an optimised electronic battery management system. 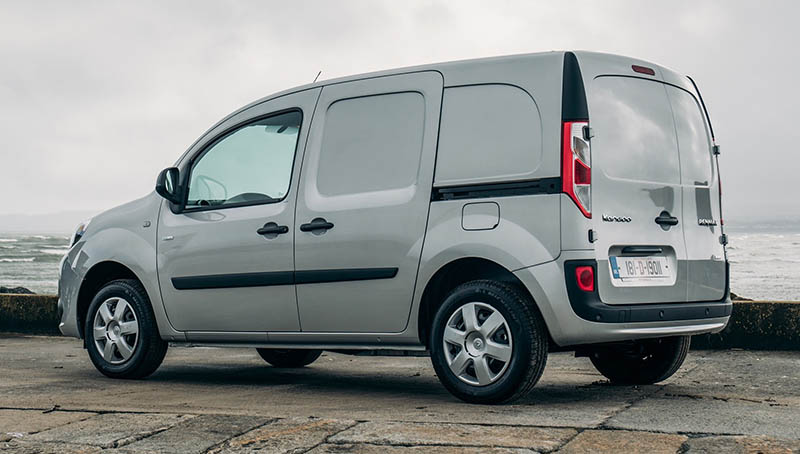 To complement the new battery and new motor, New Kangoo Van Z.E. 33 is also fitted with a new charger that is twice as powerful as the previous one. The single phase 7kW (32A, 230V) AC charger can take the new 33kWh battery to a full charge in just six hours, with the ability to ‘top-up’ the vehicle by up to 33 km in just one hour.

The Kangoo Z.E. 33’s ideal working environment is a regular daily schedule which falls within the van’s generous range, with charging done overnight.

The new van also comes with an optional heat pump, incorporated into the air conditioning. The aforementioned heat pump improves range during cold conditions and is the world’s first LCV to be equipped with this feature.

In addition, the new Kangoo Van Z.E. 33 retains its pre-conditioning system allowing users to heat or cool the vehicle prior to use whilst the vehicle is plugged in.

Offered in both standard panel van and maxi lengths, alongside a crew van version and a crew van cab version that comes with the multi-positional bulkhead as standard. Options include rear parking sensors, body coloured front bumper and the Renault R-Link infotainment and navigation system.