December was another unpredictable month for European new car registrations. Total volume grew by 21 per cent to 1,258,412 units, the highest level ever recorded for the month of December.

Monthly growth levels have not been this high since August 2018, when the impact of the WLTP regulation caused an artificial spike. Similarly to August 2018, December’s growth can be explained by looking at new regulations impacting the industry. Last month, car manufacturers took last minute action to replace gas-guzzling vehicles no longer deemed acceptable under EU emissions regulations which came into effect on January 1, 2020.

The new regulations bring in a 95 gm/km target, which is still a long way off for many manufacturers who rushed for last minute registrations, and triggered the unusual growth.

“The spike in registrations may initially look like good news, but Jato’s latest data tells a different story as emission levels have not improved for the big five markets. In fact, their volume-weighted average CO2 emissions through October 2019 totaled 122.5 g/km, which is 1.2 g/km higher than the result for the whole of 2018. The December registrations are an indication of the ongoing regulatory challenges facing car makers in the year ahead,” commented Felipe Munoz, Jato’s global analyst. 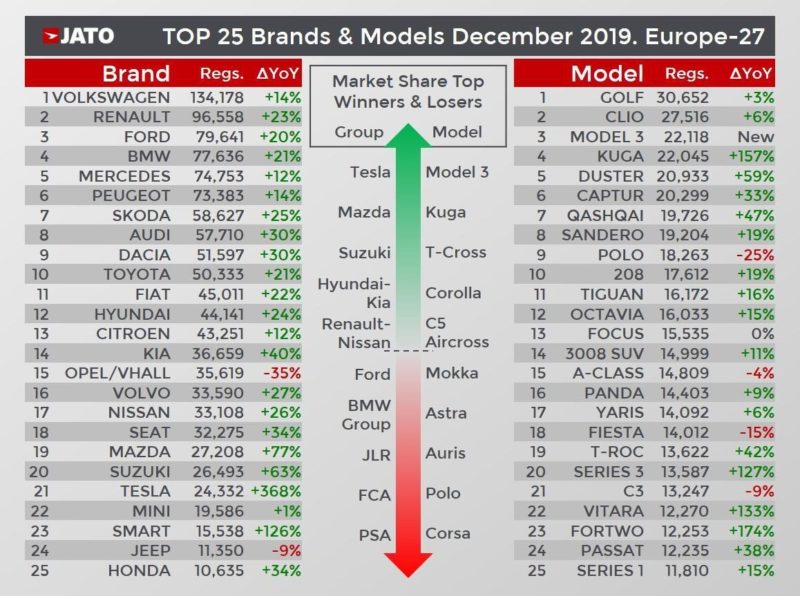 SUVs continued their strong performance in December with 524,500 units registered, or 42 per cent of total volume. The result was 42 per cent higher than the total recorded in December 2018. SUVs continue to be the main driver of growth in Europe despite their high contribution to CO2 emissions and risk of potential fines. Their market share jumped from 22 per cent in December 2014 to 42 per cent last month.

All SUVs, from small to luxury, posted double-digit growth in December. Volkswagen Group leads comfortably with a 72 per cent increase in registrations. The German manufacturer holds 22 per cent of this segment and has three SUVs in the top 10. Renault-Nissan and PSA take second and third place respectively. The Ford Kuga was the top-selling SUV, followed by the Dacia Duster and Renault Captur.

Electrified vehicles emerged as another big winner in December with demand soaring by 69 per cent – equating to 132,200 units or 11 per cent market share. In fact, the Tesla Model 3 was the most exciting performer of the closing month of 2019. With 22,100 units, it became the third best-selling model in the rankings, outselling other popular cars like the Volkswagen Polo, Peugeot 208, Nissan Qashqai and Skoda Octavia. Its volume made up 43 per cent of the BEV registrations but it wasn’t the only star among the electric cars. The Audi E-Tron was the third best-selling BEV, and the Hyundai Kona BEV and MG ZS hit the top 10.

EVs are closing the gap at an impressive rate when compared to their diesel counterparts. In December 2018, there were 4.6 diesel cars for every EV sold; a year later the ratio has fallen significantly to 2.9. Most of this progress has been due to pure electric cars (BEV), which outsold hybrid vehicles (HEV) for the first time.

In December 2019, the BEV registrations totaled 51,600 units, up by 96 per cent, while the HEV volume totaled 48,700 units, up by 41 per cent. “As expected, Tesla continues to have an enormous impact on registrations at the end of each quarter and the Model 3 has put sedans back in the spotlight. The question is whether this trend is sustainable, or will electric SUVs hinder the popularity of Tesla Model 3 in the coming months?” states Munoz.

The general rankings also featured a few surprises. While the Volkswagen Golf maintained its leadership position, the Ford Kuga occupied the fourth position and was one of the four SUVs that hit the top 10. Volume grew by 127 per cent for the new BMW 3-Series, 133 per cent for the Suzuki Vitara, and 174 per cent for the Smart Fortwo.