Audi is launching the all new Audi Q7 here later this year. It describes it as having a striking new visual design, particularly in the S Line guise, and also Audi’s top of the line connectivity.

The premium SUV features the new design of the Q family and Audi boasts that it also offers superb dynamics and excellent comfort, in addition to its superior spaciousness. Mild hybrid technology and the digital operating concept are a couple of the highlights. 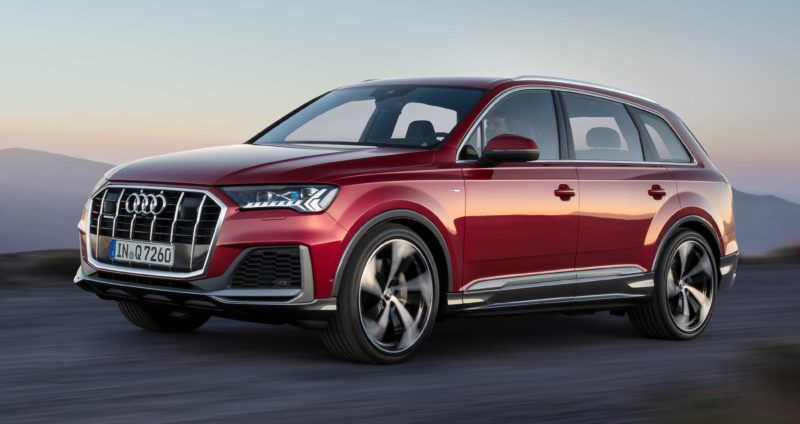 Audi claims that it has substantially enhanced the dynamic attributes of the Q7. In addition to the optimised all‑wheel steering that allows the rear wheels to turn as much as five degrees in the opposite direction, there is the option of electromechanical active roll stabilisation. Adjustable stabilisers reduce the body movements on uneven roads when driving in a straight line. With a sporty driving style, the focus is on optimum roll compensation – the tendency of the car to lean into the bend is reduced substantially.

As such, Audi says that the new Q7 is more maneuverable, precise and agile in urban traffic and on hairpin bends. It adds that in contrast, the Q7 behaves as a highly comfortable, poised touring SUV with excellent ride comfort on motorways – particularly in conjunction with the adaptive air suspension. It also provides variable ground clearance and prepares the Audi Q7 with its standard quattro drive for terrain off the beaten track. The relevant off-road mode can be selected via the standard Audi drive select dynamic handling system with its seven profiles. Air suspension comes standard on all Q7 models. The S line model includes the slightly firmer adaptive air suspension sport, which lowers the ride height by 15 millimetres compared with the regular air suspension system.

All of the engines in the Audi Q7 are coupled to an eight-speed tiptronic and the permanent all‑wheel drive. A choice of two diesel engines will be available at market launch. Shortly after the market introduction in the Autumn, a plug-in hybrid model, will join the line-up later in the year.

With seven seats, the Audi Q7 has now grown eleven millimetres in length. Audi boasts that the new Q7 outdoes its direct competitors with interior length as well as headroom and elbow room in the front and rear. It adds that a host of storage compartments including a new compartment in the instrument panel as well as the generous load capacity provide highly functional utility value.

Depending on the position of the rear seats the luggage compartment on the five-seater version offers between 865 and 2,050 litres of capacity – the latter with a flat load area. An electric tailgate is standard; foot-activated gesture control is available as an optional extra.

According to Audi, the cockpit architecture harmonises perfectly with the new, digital operating concept, which incorporates two large touchscreens. They provide haptic and acoustic feedback when clicking on the touch controls. When off, it says that the top display slots almost invisibly into the large black decorative surface.