Major new additions have been made to the INA Over Running Alternator Pulleys (OAPs) range by Schaeffler Automotive Aftermarket (UK) Ltd.

OAPs are an integral part of the Front End Auxiliary Drive system (FEAD) and are designed to absorb vibrations and fluctuations in the FEAD.

More than 150 million units have been produced since being launched in 1995 with every fifth car driving on the world’s roads being fitted with one. 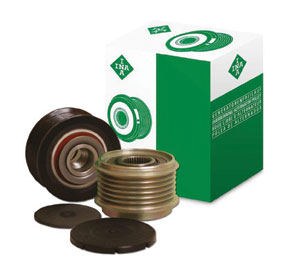 The new INA OAP part numbers cover the requirements of more than 200,000 vehicles on the UK’s roads and take the number of vehicles covered by 34 new additions this year to almost two million.

Malcolm Short, Schaeffler Automotive Aftermarket (UK) Ltd Technical Services Manager, said: “The new OAP additions not only cover mainstays of the UK car parc such as the Vauxhall Vectra and Ford Fiesta, but also some significant Japanese models such as the Nissan Qashqai.
“Garages should be aware that fitting a new OAP is straight-forward as there are tools available that allow an OAP to be replaced without the need to remove the alternator.

“The INA OAP offering is going from strength to strength and will continue to expand over the rest of the year.”

More information for exact applications for these new additions is available at www.schaeffler-aftermarket.com