The newly updated Audi Q5 is due here later this month. It offers more refined styling inside and out, improved efficiency, and the entry-level price is lower writes Padraic Deane.

It was originally launched here initially in late 2008, and since then the Q5 has increased sales each successive year. And Audi Ireland say that it remains an ever popular choice amongst both family and fleet buyers. 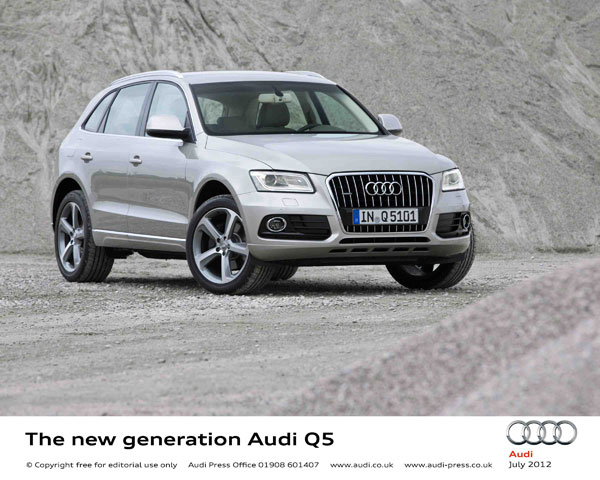 Worldwide, the Q5 is the best-selling SUV in its class in all regions, with 176,000 deliveries to customers worldwide in 2011. Audi say the secret of this success is a blend of sporty appearance, powerful efficient engines and the security of quattro four wheel drive, Now Audi Ireland tees us that the new Q5 for 2013 will be a further improvement on what was already a formidable package.
Pricing for the new Q5 is highly attractive and despite the facelift and equipment improvements, the starting price for the range drops slightly. The entry-level begins at just €40,395 (on the road) for the 2.0 TDI 143 bhp version, delivering added value for Q5 buyers for 2013.
Audi tells us that the engine range has been updated significantly and although most of the engines offer enhanced performance, and their fuel economy has been increased by up to 15%.
The 2.0TDI 143 bhp with 320 Nm of torque is the entry point to the range and with emissions lowered to just 139g, it now qualifies for tax band B. The 2.0 TDI 177 bhp with 380 Nm of torque (with S tronic and quattro drive) delivers 47.1mpg on the combined cycle.
Next, the 3.0 TDI delivers 245 bhp and 580 Nm of torque. And Audi highlights the fact that this acclaimed V6 diesel has been completely redesigned and now combines the potential for up to 44.1mpg according to the combined cycle test. This would be a big improvement on the previous 37.6 mpg. The upgraded engined model also gets a torque increase of 80 Nm over its predecessor, for even more forceful acceleration.
The four-cylinder engines are linked to a manual six-speed transmission as standard. The seven-speed S tronic twin-clutch transmission is standard for the 3.0 TDI quattro and optional for the 2.0 TDI quattro.
The quattro permanent all-wheel drive system is standard for all launch versions in Ireland. Normally, its centre differential distributes engine power to the axles at a ratio of 40:60 in favour of the rear, but it can rapidly redistribute the power at high speed when necessary. The torque vectoring system further enhances the feeling of reassurance and control it imparts with finely tuned brake interventions.
For the majority of customers, the design of the Audi Q5 is the key reason for purchasing it. Its much admired styling with its coupe-like roof line and wrap-around tailgate, has been subtly refreshed in this latest generation model. The design of the headlights has been modified, and the xenon units that are standard in S Line versions and optional for all others are now framed by new-look LED daytime running lights that form a continuous band surrounding more of the lens.
The exterior gains crisper, more precise lines finished off by a new Audi single frame grille. The high-gloss black single frame grille has beveled upper edges; its vertical chrome struts and the Audi rings have a sculpted look. The modified bumpers integrate air inlets with high-gloss black inserts and fog lights with chrome rings.
The interior of the Audi Q5 has also been subject to understated refinement. More of the controls are now trimmed in chrome, and modifications have been made to the steering column control stalks, the ignition key and the instruments. The narrow panels of the centre console are now finished in high-gloss black, and the steering wheels now feature the latest Q-specific design. The ergonomics have also been fine-tuned.
Other refinements have been made to the controls for the seat heating, the new highly efficient air conditioning system, the Audi drive select system and the multifunction steering wheel. Materials, colours and upholstery fabrics have also been updated.
All trim lines receive equipment enhancements for the new model. Bluetooth interface and spare wheel are now standard across the range. All versions also gain the new more efficient electromechanical power steering for 2013, providing improved handling dynamics and reduced Co2 emissions.
SE versions gain seat heating and automatic boot lid for 2013 in addition to the existing Milano leather upholstery, wood inlays, 18” alloy wheels, colour driver information system and colour co-ordinated bumpers and retain the same premium of €2,500 over entry models.
One option worth serious mention is the Audi MMI Navigation + with online services is new to the options list for this latest generation model, and is certainly one of its highlights. Its integrated Wireless Local Area Network (WLAN) hotspot lets passengers surf the Internet and email with their mobile devices, and it also brings customized online services into the car, such as Google Point of Interest search by voice control, navigation with Google Earth images and Google Street View.
Audi traffic information online, a service of Audi connect, offers the driver up-to-the-minute information about traffic on the selected route. Another new feature is the smartphone app Audi music stream.
Q5 drivers can use it to receive more than 5,000 Internet radio stations, and can save their favourites to their mobile phones. The selected program accesses MMI navigation plus via WLAN, and its audio signal is transmitted over the audio system loudspeakers. Web radio is also controlled from the vehicle’s user terminal.

New Audi Q5 S Line
A new option for 2013 models is the Q5 S Line version available for €3,385 above SE versions. Fitted with equipment familiar to S Line aficionados, the Q5 S Line adds Xenon Lights with LED daytime running lights, S Line sports package, S Line exterior package, 18” S Line sport alloy wheels, Leather / Alcantara S Line embossed sports seats and S Line 3 spoke multifunction leather steering wheel.
The new S Q5 will be notable as the first TDI-powered ‘S’ model in the history of the Vorsprung durch Technik brand, and will offer a choice blend of 313 BHP and 39 mpg capability. It is scheduled to open for orders from Irish buyers in November priced at around €72,000 ahead of first deliveries next spring.
The 3.0-litre BiTDI engine powering the new SQ5 TDI produces a brawny 313PS and 650 Nm of torque between 1,450 and 2,800 rpm. Channeled through an eight-speed tiptronic automatic transmission and via quattro all-wheel-drive it is good for a 0-100km/h time of just 5.1 seconds and a governed 250km/h top speed, and sounds every inch an ‘S’ model as it punches at the horizon thanks to a specially developed sound actuator in the exhaust system which enriches the exhaust note.