For the third year in succession, local crew Manus Kelly and Donall Barrett in a Subaru Impreza took top place in the Joule Donegal International Rally, but in a completely different way from their first two triumphs.

In each of the previous years, they only took the lead on the final stages of the three day rally, but this time, they set the pace on Friday’s opening stage, and apart from slipping to fifth position on the following test, they led for seventeen of the twenty stages, winning by 42 seconds despite easing off for yesterday’s two loops in order not to take any risks.

Josh Moffett and Andy Hayes held runner up spot setting out yesterday morning in the first of a group of Ford Fiesta R5s, but Josh’s elder brother Sam, a former winner of the rally, was on a charge, and took over second place halfway through the day, opening out a 22 second margin by the finish. 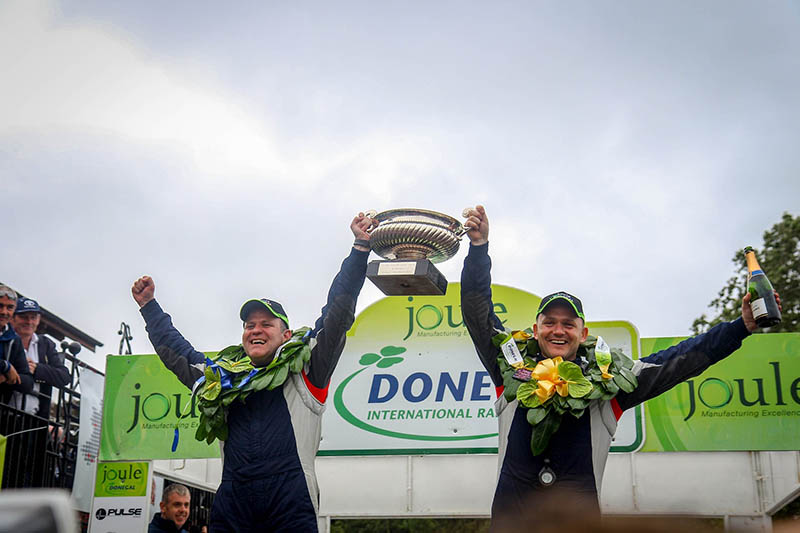 Two recent winners of the Billy Coleman Award for Young Rally Driver of the Year followed the Monaghan pair home, with Killarney’s Rob Duggan finishing fourth and the current title holder, Callum Devine from Derry, fifth. Both of them put in exceptional drives on their first outings in a powerful R5 car.

There was a heavy toll of casualties among the top 20 seeds, with most of these retiring on Saturday, the longest day of the rally. Declan Boyle’s Fiesta went out with a broken transmission, while Garry Jennings, Rob Barrable, Donagh Kelly and Darren Gass were just some of those who went off the road and couldn’t rejoin.

In a dramatic finish, Jason Black got the better of a day-long duel with Jordan Hone to claim the Junior Rally by just two seconds on the last stage, after the pair had taken turns to lead.