A recent study from the UK has revealed that most drivers think that fully autonomous cars are available to buy today.

This is despite the fact that only assisted driving systems, which require driver support, are currently available in the UK.

Thatcham Research has revealed the findings from its Trust in Automation consumer study, which surveyed 2,000 drivers in the UK.

It found that 52 per cent mistakenly believe that fully autonomous driving is possible today.

The figure rises to 72 per cent of the 2,000 motorists also surveyed by Thatcham Research in the United States. 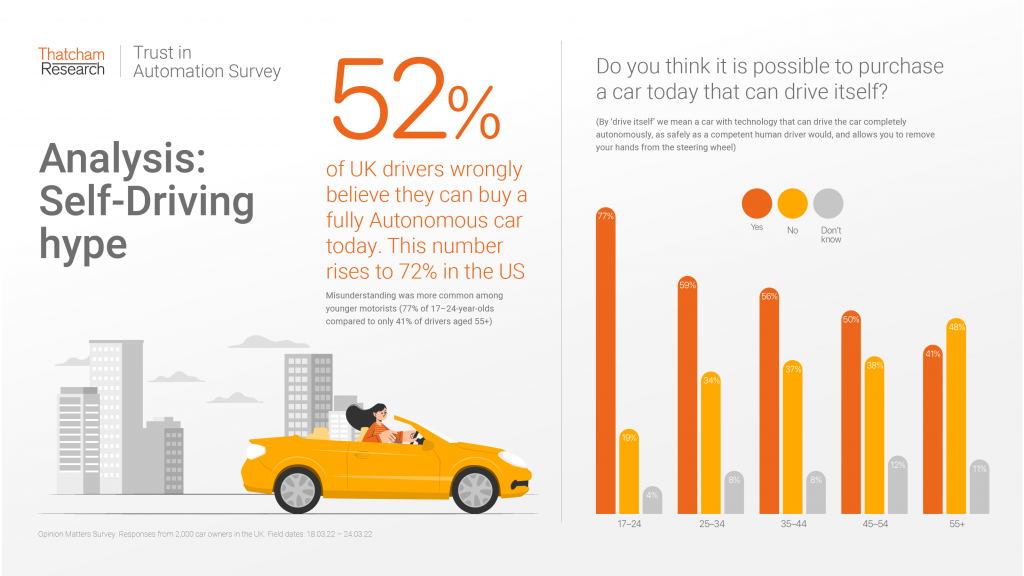 Matthew Avery, chief strategic research officer at Thatcham Research said the perception of autonomous driving is “racing ahead of the reality”.

“This demonstrates just how much work needs to be done to set realistic consumer expectations of the first vehicles offering limited self-driving functionality, when they do become available. Put simply, the benefits of automation will not be delivered if people don’t fully understand its limitations,” he warned.

UK roads will potentially see vehicles with ‘self-driving capability’ by 2025, according to a recent Government announcement.

However, the first iterations of the technology, known as ALKS (Automated Lane Keeping Systems) can only be activated on motorways with the driver needing to resume control as required.

The false impression regarding the current availability of self-driving technology was found to be more prevalent in younger age groups (77% of 17–24-year-olds) than it was amongst those aged 55+ (41%).

When asked by Thatcham Research what they consider the key benefits of the technology to be, the most popular option of UK drivers was improving safety through removing human error (21%), followed by improving mobility for the elderly and disabled (14%) and reducing pollution through fewer traffic jams and unnecessary acceleration / deceleration (8%).

Very few drivers saw freeing up time to work (3%), entertain themselves (3%) or sleep (2%) as advantages to automation.

Even though drivers were most likely to see safety as a key benefit of automation, the survey found that 76 per cent of UK drivers would keep their eyes on the road when the first cars with self-driving capabilities like ALKS were made available to them.

This is despite respondents being told that the technology would specifically allow them to take their eyes off the road.

“Even when told they can rely on the system and take their eyes off the road, most people would still prefer to oversee the driving task,” Avery added.

“This suggests that although safety is seen by many to be a key benefit of Automation, trust and confidence needs to be nurtured over time.”