Mitsubishi has challenged its dealership staff to come up with the theme of a one-off special edition L200 to be unveiled in April. 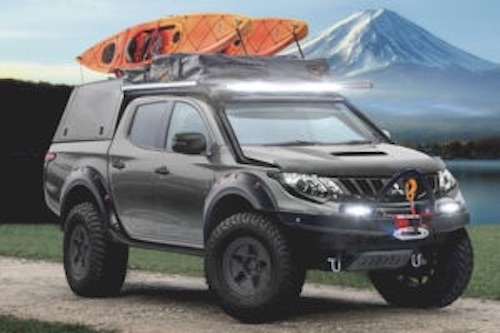 The ‘Truck King Battle’ competition was opened to UK dealership staff across the Mitsubishi Motors network in January, giving all dealer staff the potential to design their very own one-off Mitsubishi Series 5 L200 Pick-Up. The finalists’ designs were then professionally rendered in a digital form.

The five creations have now been posted across the Mitsubishi Motors in the UK social media channels – Twitter @MitsubishiUK, Facebook @MitsubishiUK and Instagram @mitsubishimotorsuk. The truck with the highest level of engagement will be declared the winner and will be announced on March 21.

The winning design will be created as a bespoke one-off truck, due to be unveiled at the CV Show on 30 April.

Mitsubishi Motors in the UK said, “The ‘Truck King Battle’ is a way of engaging with our dealers and getting them involved in a creative project, illustrating the opportunities for customisation and personalisation of our best-selling pick-up truck.

“The diverse and adaptable nature of the Mitsubishi L200 has meant the dealers’ entries for the ‘Truck King Battle’ have been wide-ranging and we look forward to seeing which one gets the most engagement across our social media channels.”