The average cost of running a family car for a year is €10,593.26 according to the AA’s annual survey of motoring costs. According to their calculations, the total is a decrease of €98.11 on the same figure for last year. 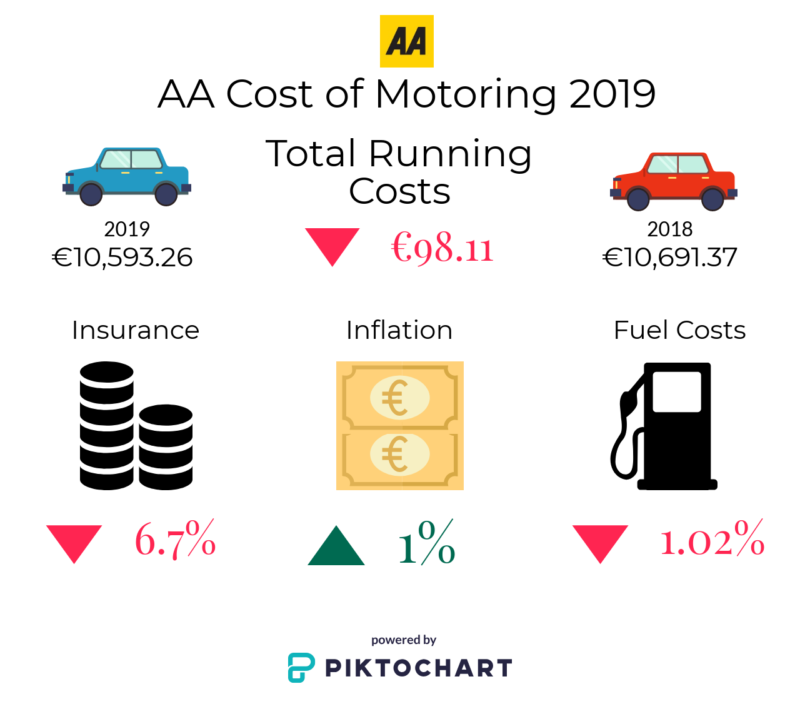 According to the CSO’s Consumer Price Index the average cost of motor insurance has dropped by 6.7 per cent compared between June 2018 and June 2019[1]. This is not even across the market however, and the motoring organisation says that the small reduction has only benefitted the mainstream market of motorists with conventional risk profiles. Groups like returning immigrants, young drivers and those with penalty points or a claims history, still pay inordinately high prices in the ongoing insurance costs crisis.

In better news, the AA’s monthly fuel prices survey indicates the average cost of a litre of fuel has dropped by 2.5 per cent in the last 12 months. However, the AA highlighted that the most recent drop in fuel prices came after a period of significant increases at the pump earlier in 2019.

“For the second successive year, the CSO findings in relation to insurance show a significant year-on-year drop. While this is a positive development, we’re still a long way away from truly fixing many of the issues in our insurance system which contributed to the price rises seen from 2015. It’s true that some progress has been made in this space, but with each passing month it begins to feel more and more that government have moved their attention onto other matters and that motorists are simply being forced to get used to higher insurance prices,” Conor Faughnan, AA Director of Consumer Affairs stated.

“This is particularly true for anyone with an abnormal or non-standard driving history. Whether it is the case of a young driver or a returning emigrant, these cohorts are still seeing massive insurance bills particularly in year one of driving in Ireland.”

Each year the AA says that it calculates average prices for each of the respective tax bands and illustrates the cost of running an average family car.

The cost of running a ‘Band B’ category (producing emissions of between 120-140g/km per kilometre driven car decreased by 0.92 per cent) in 2019 when compared to the 2018 figure.
Other motoring costs did not change significantly with only slight adjustments to be made. This is reflected in the AA’s calculation of the cost of oil, tyres, servicing, repairs, replacements and garage parking.

The AA calculates the annual cost of motoring each year using a holistic figure that includes the obvious things like fuel, insurance, servicing but also factors in a whole range of other costs. These include costs like depreciation and interest charges, as well as replacement for components such as tyres etc. over the car’s life. The figure assumes a motorist that buys a new car and retains it for 8 years at an average annual mileage of 16,000 kms. It also assumes that all repairs, replacements and servicing are carried out as per manufacturer’s recommendations.