The 2019 Irish Van of the Year Award winners were announced last Thursday night. The awards are presented in association with Continental Tyres, and the winner was the Mercedes-Benz Sprinter. 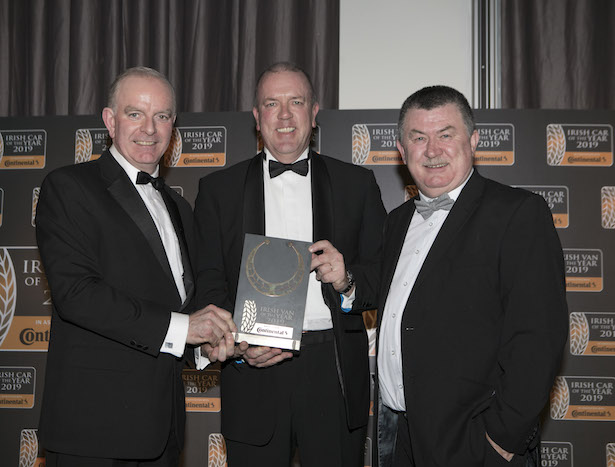 The full list of contenders for the 2019 Irish Van of the Year award were: Ford Transit Connect, Ford Transit Custom, Iveco Daily, LDV EV80, MAN TGE, Nissan eNV200, Mercedes-Benz Sprinter and Volkswagen Crafter. As this list shows, this was a very competitive competition.

Tom Dennigan of award sponsors, Continental Tyres, said: “This latest version of the Mercedes-Benz Sprinter brings a new level of comfort, driving dynamics and economy to the commercial sector and it is no surprise that it has been voted the best van in Ireland. I am sure the Irish Van of the Year title will be a huge boost to the Sprinter in the very competitive commercial vehicle marketplace.”

Commenting on their success in winning the Irish Van of the Year award, Fergus Conheady, sales manager for Mercedes-Benz commercial vehicles in Ireland, said: “From what was an exceedingly competitive field – with so many high-profile challengers – we were delighted and honoured that adjudicators chose the Mercedes-Benz Sprinter as Ireland’s 2019 Van of the Year.”

“As with its predecessors that were similarly honoured in earlier years, the new Sprinter sets a standard against which all new vans in its category can be measured”

“We congratulate and thank members of the IMWA and APMP, the Irish Van of the Year jury members, and sponsors Continental Tyres for their continued organisation and support of this prestigious event – one especially valuable to vehicle owners, motor industry and public alike.”

Brian Byrne, chairman of the Van Jury of the Irish Motoring Writers Association commented on the result: “The improved safety and driver assistance systems of the new Mercedes-Benz Sprinter alone make it a worthy winner against some very capable competition, but the future-proofing of the vehicle by making it ready for new developments in delivery technologies brings it to another level.”

Padraic Deane is a member of the nine member Irish Van of the Year jury.

The 2019 Irish Car of the Year Award winners were also announced on the night and the overall winner was the Volvo XC40.