Mazda and Toyota has announced they have selected Huntsville, Alabama as the site of their new joint-venture manufacturing plant. 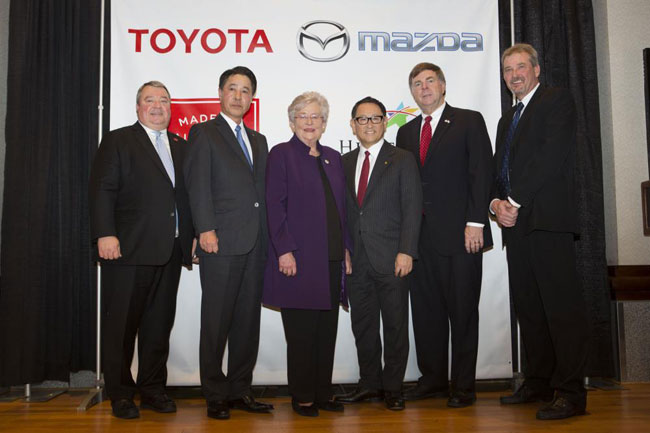 The new plant will have the capacity to build 300,000 vehicles annually, with production split evenly between two lines for each company to produce Mazda’s crossover model that will be newly introduced to the North American market and the Toyota Corolla.

The joint venture represents a $1.6 billion investment that Mazda and Toyota plan to make with equal funding contributions. The site for the new plant is in Huntsville, located approximately 14 miles from Toyota’s Alabama plant (Toyota Motor Manufacturing, Alabama, Inc.). The facility is expected to create up to 4,000 jobs. Production is expected to begin by 2021.

“The partnership between Mazda and Toyota will expand innovative automotive manufacturing in Alabama,” Governor Ivey said. “Their decision to locate this new facility in Huntsville is a testament to the talented workforce in our state. We are proud that this partnership puts Alabama on the forefront of technology in this dynamic global industry.”

For Mazda, the plant comes on line in a significant year that will mark the start of the company’s second century of operation and second half-century of sales in the U.S. The automaker is enhancing its commitment to the U.S. market and will focus efforts on manufacturing and increasing sales in the country.

For Toyota, this joint-venture plant will be its 11th U.S. manufacturing facility and represents its continued commitment in the U.S., in addition to the $10 billion dollar investment over the next 5 years that was announced in January 2017.

The State of Alabama is the fifth largest producer of cars and light trucks nationally with a strong automotive manufacturing presence including Toyota’s engine plant in Huntsville, where Toyota employs 1,400 team members. With more than 150 Tier 1 and 2 automotive suppliers in the state as well as automakers, there are approximately 57,000 automotive manufacturing jobs in Alabama.

In the coming months, after obtaining approvals and authorization by antitrust agencies, the new joint venture will be established, and site preparations will begin with the start of production in 2021.