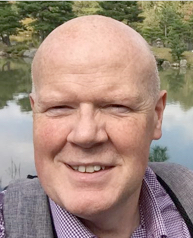 It was with great sadness that we received the news of the death of Martin Kinsella, a valued member of the Toyota Ireland aftersales team.

Martin, who lived in Swords, Co. Dublin, passed away on the 15th February 2021, (peacefully) at St. Francis Hospice, Blanchardstown, surrounded by his loving family.

Martin is survived by his loving wife Zena, his children Leanne and Alan, his grand daughter Lillie, his brothers Eamon, Vincent, and sister Deirdre.

He will also be sadly missed other relatives, neighbours and wide circle of friends, including his colleagues in Toyota Ireland and the Toyota dealer network.

Martin’s funeral took place on Thursday 18 February 2021 at St Cronan’s Church in Swords under Covid-19 restrictions and was followed by cremation at Dardistown Cemetery.

Martin Kinsella began his successful career in the motor industry when he started his apprenticeship with Tom O Neill Motors, then a Saab Dealer. From there, he moved to the OHM Group before joining Toyota Ireland in a technical support role in 1998.

However, Martin’s true vocation lay in training and he moved into a Technical Training role with Toyota Ireland in 1999.

Martin soon became responsible for all of Toyota Ireland’s technical training and was heavily involved in the rollout of Hybrid system training from 2000 onwards. As part of his role, Martin regularly attended Train-the-Trainer events with Toyota Motor Europe in Brussels and took pride in passing the knowledge gained at these events on to Technicians in the Toyota network. Training was Martin’s passion and he excelled at explaining complex technology in a manner that people could easily understand.

Martin was well known in the Toyota network having delivered training to all Technicians in the network over the last 20 years. He also worked with SIMI and the Technical Colleges as part of the development of the National Apprenticeship Programme. As part of this commitment, Martin hosted an event in Toyota Ireland for the Technical Colleges in November 2019. At this event, Martin shared technical knowledge on the latest Toyota Safety System developments in addition to the latest Hybrid system developments. This was much appreciated by all of the attendees at the time.

He also played a key role in managing and running the successful Toyota National Skills contest which last took place in November 2019.