Located on the Nangor Road, Dublin 12, Volkswagen Group Ireland’s National Learning Centre is one of the best introductions to life as a mechanic.

Wide-eyed apprentices get to work with the full gamut of hardware, from brand new electric vehicles to internal combustion engines, gearboxes, battery cells and the computers that help diagnose any faults. Training cars are rigged so instructors can trigger faults at the press of a button while there is even a fully spec’d Audi A7 with 50km on the clock that will never get to see public roads.

Since 2019, the National Learning Centre has been running introduction days for trainees as part of their four-year apprenticeships. Facilities include six state-of-the-art training rooms, a canteen and mezzanine level overlooking a workshop floor featuring four mechanical car lifts.

Apprentices who attend split their time between workshops in car dealerships and the classrooms of Institutes of Technology and state-run training body Solas. 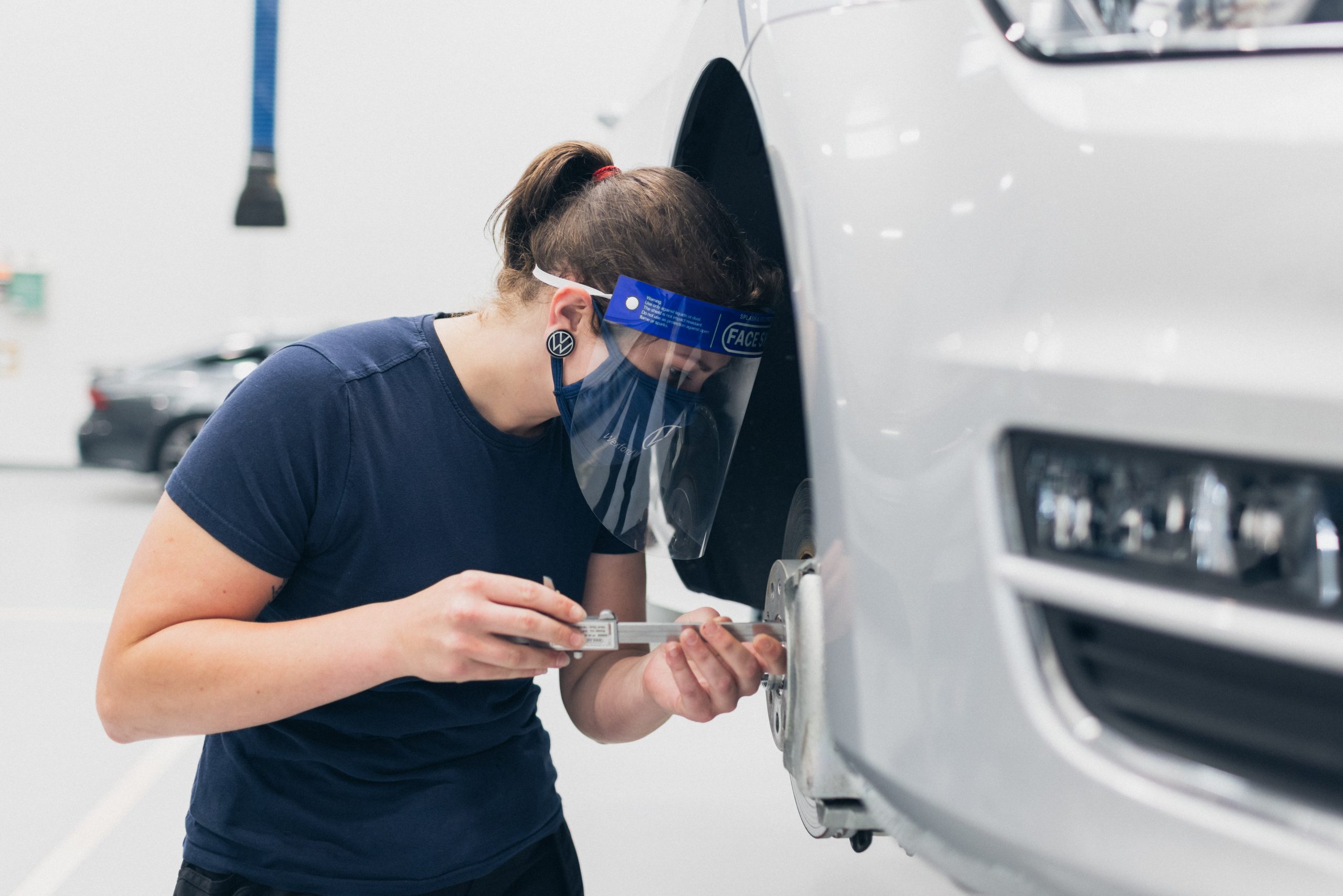 Attending the National Training Centre means that, at the end of their seven-phase apprenticeships, trainees become fully certified Volkswagen technicians. From there they can work in any Volkswagen Group dealership or specialise in one of a number of fields, from engine and gearbox maintenance to becoming air conditioning and diagnostics specialists.

Retention is a huge issue for third level colleges and universities across the country with students dropping out in their first year due to a lack of finances. With an apprenticeship, trainees are paid as they work towards their qualifications.

One apprentice mechanic at the National Training Centre is Chelsea Bruhn, who has been tipped for a career in Formula One by bosses at Volkswagen Ireland.

Unlike most of her school friends, Bruhn grew up obsessed with cars and was determined to find a career that would feed her mechanical passion.

“Ever since I was old enough to hold a screwdriver I was taking things apart and trying to figure out how they worked,” she says, “I had an awful habit of bringing my parents random screws and bolts. Eventually my desk would fall apart and that’s when they figured out where all the bits came from.”

For Bruhn, becoming an apprentice with Volkswagen has allowed her access to a state-of-the-art training scheme coupled with the bonus of being able to earn while she learns.

Like many of her peers, Bruhn realised early on that full-time college was not for her. Born in Berlin, Germany, she immigrated to Ireland with her family when she was 16-years-old. Based in Gorey, Co Wexford, she studied mechanical and polymer engineering at AIT Athlone. However, after two years of class work, she dropped out of college and started looking for hands-on experience.

In February 2020, shortly before the pandemic brought the world to a standstill, the 24-year-old landed an apprenticeship with Wexford Volkswagen in Strandfield, Co. Wexford. 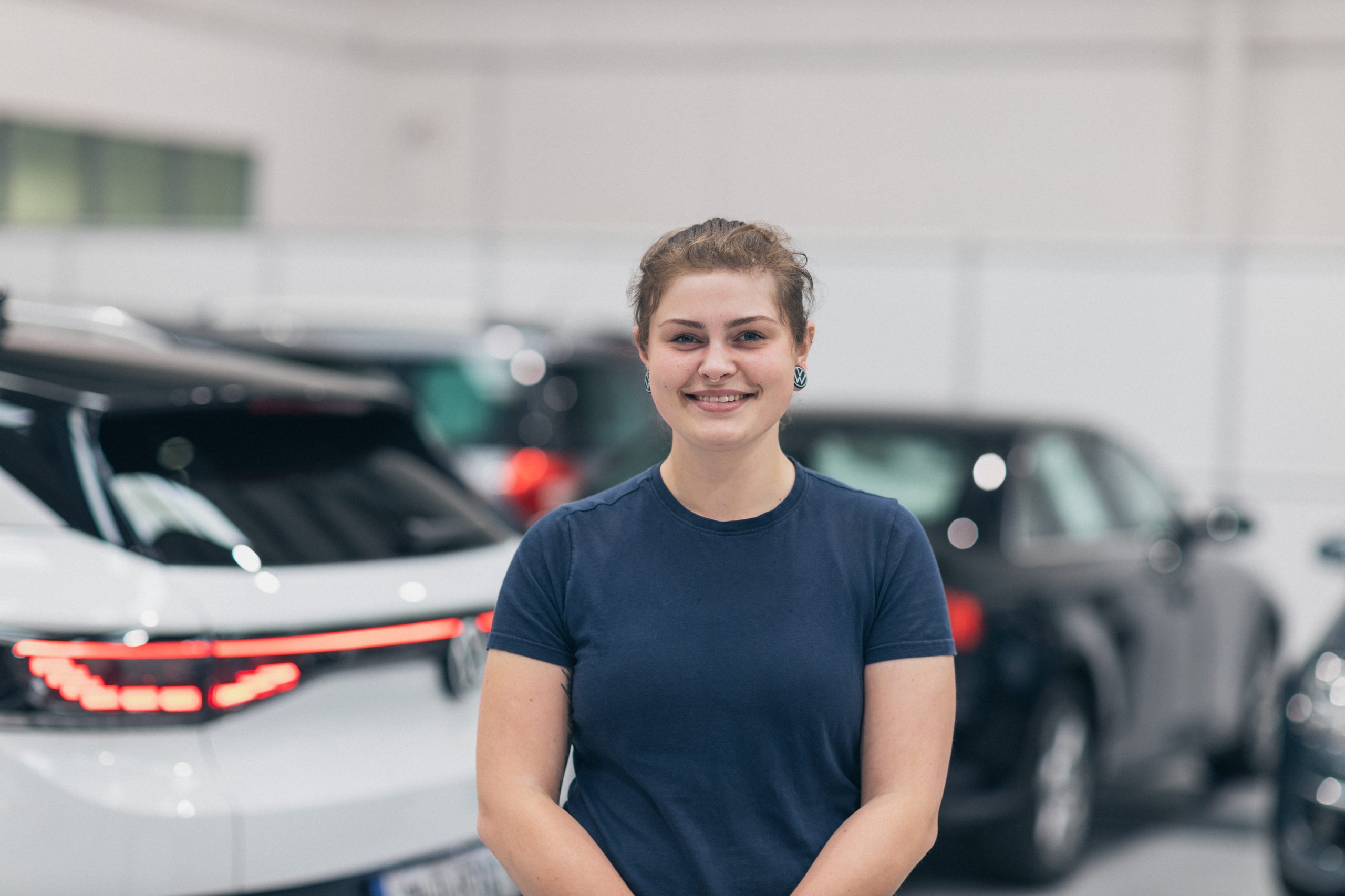 “I was incredibly lucky because a couple of months later and I wouldn’t have got the job,” she says, “I was able to work right through the pandemic while my friends were stuck at home during lockdown.”

A bursary of €2,667 is currently available to employers who register female apprentices in a craft apprenticeship, but women are still underrepresented. In June this year, the number of female apprentices surpassed 1,000 for the first time in Irish history, rising from just 26 in 2015.

Bruhn hasn’t let the lack of females put her off and she has thrived in an environment where others might have felt intimidated.

“I have struggled with sexism my entire life,” she says “Even in secondary school, I was the first girl to do metalwork, construction studies and engineering. If I got an award, it felt like I was getting it out of pity rather than merit. Some men are uncomfortable having a woman in the workshop, but my co-workers have been great and there has been lots of positive feedback.”

If she wasn’t a mechanic, Bruhn would probably be toughing it out in the US Marine Corp with her sister Sandy. One of their father’s many jobs was a manager on military bases. Having grown up on army bases around the world, the pair were naturally drawn to a career in the services. But while Sandy strives to become a doctor, Chelsea Bruhn is laser focused on her career as a mechanic.

Head of Volkswagen Group Training, John Cunningham, is convinced she can go all the way to the top of the profession. “Chelsea is the type of person who ends up working in Formula One,” he says, “I would not be at all surprised to hear she is working for Lotus or McLaren in 10 years’ time.”

Cunningham is certainly well placed to spot rising talent. A former apprentice himself, he quickly moved into service management, joined the Linders Group as aftersales manager and Dublin-based dealership EP Mooney. He joined Volkswagen Group 10 years ago as head of aftersales and went on to become head of dealer network development for Seat and Cupra.

“When I entered the motor industry it was a testosterone-fuelled business,” he says, “You had two types of gearboxes and two types of very basic engine. Now we have nine engines, a much bigger gearbox range and everyone is working from a laptop because the technology has gone through the roof.

“In the past, Leaving Cert students would rock up to their local garage, hand in a CV and say, ‘I’m looking to have an apprenticeship’. Now the job is a lot more sophisticated, and we need a higher calibre of entrant, but people still come into the industry because they love working on cars.”

Cunningham compares the switch from internal combustion to electric vehicles to the move from propeller-driven aircraft to jet planes.

In preparation for the switch, Volkswagen began training high-voltage technicians years ago. Dealing with 400 volts of direct current, it is vital technicians are trained to make hybrid and electric cars safe before delving below the bonnet. Add in a wealth of connectivity and convenience features and apprentices need to be more tech savvy than ever.

In April, the government announced plans to double the number of apprentices to 10,000 a year under a new five-year plan for school leavers. The National Learning Centre’s technical training manager, Tadhg Cronin, who himself started out as an apprentice, says rewarding careers await those who make the grade.

“It’s a great career,” he says “Every day is different, and we have some incredibly exciting products to work on. Once you qualify, that qualification is recognised by every Volkswagen dealer the world over.”

When she is not in the workshop, Bruhn can usually be found tinkering under the hood of her beloved 1.2-litre Skoda Fabia.

“In Germany, they use the expression ‘Diesel Im Blut’ or ‘Diesel in the blood’,” she says, “It takes 10 years to become a master technician, so I want to get there by the time I’m 35. I am proud of my work because I feel like it is something I was born to do. I want to prove myself and be the best woman in this field because I know I am capable. I am here to make a point.”